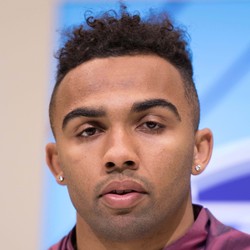 A source told Cowboys Sports Illustrated that Dallas is “eyeing a trade for a slot WR like Christian Kirk or Marquise Goodwin.”

The general consensus inside Cowboys Brass when asked about solving the slot-receiver vacancy left by Randall Cobb is that “yes” they should. Specifically, rumblings of a receiver such as Kirk or Goodwin have swirled and become legitimate. Both players are in situations where they’re either expendable due to an incoming WR (Kirk with DeAndre Hopkins coming in) or the team has somewhat moved on from them (Goodwin in San Francisco). Kirk in particular is still very young and has a lot of unmet potential. Last season, he had 68 catches for 709 yards and three TDs. Trade rumors always pop up around Draft time, but this one may just have some legs to stand on.

It's a nice bounce-back game from Week 16 where Kirk failed to catch any of his five targets. The 23-year-old finishes his second season with 68 catches, 729 yards, and three touchdowns. Incredibly, all three of those TDs came in a Week 10 game against the Bucs. The Cardinals showed enough offensive promise this season to make Kirk an upside fantasy selection heading into 2020.

Christian Kirk failed to catch any of his five targets in Week 16.

He rushed twice for nine yards. The 23-year-old has been an up-and-down fantasy option this year but this was a new low for him on the season. Kirk will be impossible to trust in Week 17 against the Rams.

While Kirk is said to be a game-time call, Rapoport is suggesting that he will indeed play in a middle-of-the-road matchup facing a Seahawks secondary surrendering the 15th-most FPPG (22.7) to enemy wideouts. While the Seattle secondary has played better in the second half, they have been gashed in each of the past two games allowing Cooper Kupp, D.J. Moore, Curtis Samuel and Robert Woods to score or accumulate at least 113 yards receiving. Kirk will flirt with the WR2 tier in PPR formats if he is indeed active for Week 16.

Christian Kirk (ankle) is listed as questionable for Sunday's contest at Seattle.

Kirk logged limited sessions both Thursday and Friday, but it was reported that he will be a game-time decision. Fantasy owners should monitor his status 90 minutes before Sunday's 4:25 p.m. ET kickoff. If Kirk is active, he is a WR3 for Week 16.

Deposit $10 at a DFS partner site you have NOT played at and get a FREE 6 Month HOF Subscription!
Claim Offer
Who Should I Draft?
Most Accurate Experts
for Christian Kirk
Consensus Rankings
View All Rankings
Do Not Sell
Are you looking to contact Customer Support about a subscription or account related question?
Yes
No, I'm a California resident looking for the California Consumer Privacy Act form