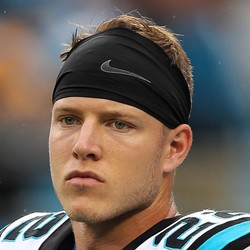 McCaffrey has become the highest-paid running back in football and is guaranteed $30 million. It was reported that McCaffrey would not play every down and could be rested occasionally. CMC had a monster season in 2019. He logged 287 carries for 1,387 rushing yards and recorded 116 receptions for 1,005 receiving yards with 19 touchdowns. The 23-year-old running back is the consensus number-one overall pick in upcoming 2020 fantasy drafts.

Panthers coach Matt Rhule indicated to reporters Tuesday that he wants to avoid having Christian McCaffrey on the field for every snap this season.

Obviously, Rhule also said that McCaffrey will still be a featured piece in the offense. The star running back, who just signed a lucrative four-year extension, played over 1,000 snaps last year. That is unheard of in this day and age. McCaffrey also played the most snaps of any running back in 2018. It is easy for coaches to say things like this during the off-season, but come game day it could prove difficult to take CMC off the field. He remains the consensus number one draft pick in fantasy football.

Christian McCaffrey signs a four-year extension worth $64 million, making him the highest- paid running back in NFL history.

McCaffrey will earn $16 million annually, making him the highest paid running back in NFL history. CMC had a monster season in 2019. He logged 287 carries for 1,387 rushing yards and recorded 116 receptions for 1,005 receiving yards with 19 touchdowns. The deal will keep McCaffrey in a Panther uniform until 2024. The 23-year-old running back is the consensus number-one overall pick in upcoming 2020 fantasy drafts.

Panthers GM Matt Hurney told reporters on Monday that the team has had internal discussions in regards to a Christian McCaffrey contract extension.

Hurney's exact words were "obviously we've had internal discussions. Everybody knows what we think of Christian as a player". McCaffrey's rookie contract is up after the 2020 season but Carolina is obviously going to pick up the fifth-year option for 2021. We all learned from the Rams' handling of Todd Gurley that it can be risky extending a running back before you have to, but CMC appears to come with less question marks. McCaffrey should be viewed as the consensus top pick in 2020 fantasy drafts.

Panthers RB Christian McCaffrey rushed nine times for 26 yards and a touchdown while catching 7-of-10 targets for 72 yards in Sunday's Week 17 loss to the Saints.

McCaffrey joined Roger Craig and Marshall Faulk as the third player in NFL history to post 1,000 rushing and 1,000 yards receiving. The lone bright spot on the Panthers, McCaffrey will look to follow up his historic 2019 season with another fantasy-friendly campaign in 2020. CMC should open 2020 as the No. 1 overall player in fantasy football.

Deposit $10 at a DFS partner site you have NOT played at and get a FREE 6 Month HOF Subscription!
Claim Offer
Who Should I Draft?
Most Accurate Experts
for Christian McCaffrey
Consensus Rankings
View All Rankings
Do Not Sell
Are you looking to contact Customer Support about a subscription or account related question?
Yes
No, I'm a California resident looking for the California Consumer Privacy Act form