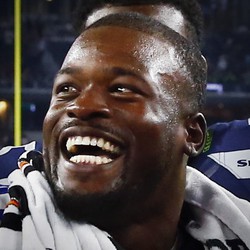 Michael made the team to open the season, but he has only had two carries in two games this season. His release indicates that the Colts are planning to move forward with Marlon Mack, Jordan Wilkins and satellite back Nyheim Hines at RB.

Christine Michael has made Indianapolis' 53-man roster according to the Colts website.

Michael could see some work in Week 1 if Marlon Mack does not dress for the game. He is currently fourth on the depth chart so its hard to see him getting any kind of volume and does not have any fantasy value.

Christine Michael had three carries for 12 yards and one reception for three yards in Thursday's preseason win at Seattle.

Michael is battling to make the Colts roster as a reserve running back. The 27-year-old has a solid chance of making the team but even if he does he will not be fantasy relevant.

ESPN's Adam Schefter is reporting the Indianapolis Colts have placed running back Christine Michael on the injured reserve list Thursday.

Michael was placed on injured reserve list Thursday with an undisclosed injury, per Schefter. His 2017 season is likely over unless he is designated to return by the Colts later in the year. Unless Marlon Mack or Josh Ferguson impresses, it looks more and more like Robert Turbin is a lock to open the upcoming campaign as Frank Gore's primary backup.

ESPN's Field Yates is reporting the Indianapolis Colts and free agent running back Christine Michael have agreed to terms on an undisclosed deal.

Michael, formerly of the Packers, signed with the Colts Thursday. The veteran rusher will join a Colts backfield led by the aging Frank Gore and will likely compete with Robert Turbin for the role of the No. 2 back on the depth chart. However, I fully expect Turbin, who totaled a career-high eight touchdowns in 2016, to enter the upcoming season as Gore's primary handcuff. Michael should only see fantasy value if an injury occurs to one of the backs slated ahead of him on the depth chart.