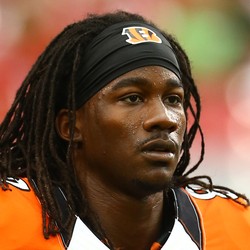 Although Hamilton had a role with the Steelers last season, they added JuJu Smith-Schuster in the draft and Martavis Bryant is reinstated. Since Hamilton was the low-man on the totem pole, he was the odd man out. He'll likely find his way on to a practice squad in the near future.

Pittsburgh Steelers WR Cobi Hamilton caught 2-of-2 targets for a game-high 72 yards and a touchdown in Friday's preseason game against the Giants.

Hamilton's receptions were both chunk-yardage gains, one good for 44 yards, and the other a 28-yard score in the second quarter. With a crowded WR depth chart in Pittsburgh, Hamilton's roster spot is far from a lock, but this showing will only help his chances. He'll look to play another strong game next Sunday against the Falcons.

The Pittsburgh Steelers and wide receiver Cobi Hamilton agreed to terms on a one-year deal.

Hamilton played in 11 games with Pittsburgh in 2016 and proved to be a solid role player for their offense. He caught 17 targets for 234 yards receiving and two touchdowns while playing in a limited number of snaps. He'll compete throughout the offseason for a chance to earn an expanded role in 2017.

Cobi Hamilton had two catches for 36 yards and a touchdown on Sunday vs Miami.

Hamilton is buried on the depth chart and was just called up from the practice squad. It's unlikely he'll have consistent success with the wide receivers currently in front of him.