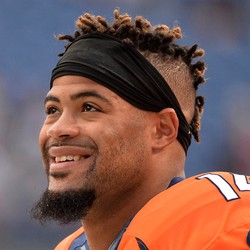 Former Giants and Broncos WR Cody Latimer is signing a deal with the Washington Redskins.

Latimer, a 2014 second-round pick out of Indiana, started his career with the Broncos before joining the Giants in 2018. He’s never had more than 24 receptions, 300 yards, and two touchdowns in any given season in his six-year career. He’ll look for a fresh start with new head coach Ron Rivera on a relatively young Washington offense. Latimer is not a target in fantasy leagues going into the 2020 season, as he’s behind at a minimum Terry McLaurin and Steven Sims on the depth chart.

Giants wide receiver Cody Latimer caught five of his seven targets for 44 yards and a touchdown in Sunday's win over Washington.

Latimer has not had much of a role this season but saw his most targets since Week 1 against Dallas on Sunday, partially due to the fact that Darius Slayton had to leave the game due to an injury for part of the game.

Giants wide receiver Cody Latimer caught two of his three targets for eight yards and one touchdown in Monday's loss to the Dallas Cowboys.

This was Latimer's first touchdown of the season, and he is not really someone that fantasy owners can rely on given his lack of production this season, even with Sterling Shepard missing time.

Giants wide receiver Cody Latimer caught four of his five targets for 33 yards in Sunday's loss to the Cardinals.

The Giants are rotating receivers with Sterling Shepard out, and Latimer is just one of the options seeing targets. Over the last three weeks, he has just four catches for 33 yards on seven targets.

Giants wide receiver Cody Latimer was unable to haul in his only target in the team's Week 6 loss to the New England Patriots on Thursday Night Football.

Despite a number of injuries to the New York offense, Latimer does not have any catches over the last two weeks. With some of the team's playmakers expected back next week, Latimer appears to have missed his opportunity to prove he is worthy of an increased role in the offense.