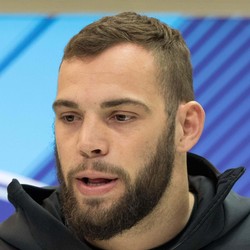 A video surfaced Sunday of Eagles TE Dallas Goedert being sucker punched at a South Dakota bar on Saturday.

Goedert is reportedly doing fine after the incident. The video shows the Eagles TE being punched completely unprovoked and hitting the ground seemingly unconscious. For those wondering why he was at a bar in South Dakota, Goedert is from North Dakota, and was a second round pick in 2018 out of South Dakota State. Hopefully the reports of him being ok are true and he can open training camp with a clean bill of health. He and fellow TE Zach Ertz make the best 1-2 tandem at the tight end position in the NFL. Goedert can be viewed as a low-end TE1 this season with high-end TE1 upside should anything happen to Ertz.

Eagles tight end Dallas Goedert caught seven of his eight targets for 73 yards in Sunday's loss to the Seattle Seahawks in the first round of the playoffs.

With the Eagles dealing with several injuries to skill position players in the second half of the season, Goedert saw his role in the offense gradually increase. While he will still be Philadelphia's TE2 in 2020 as long as Zach Ertz is around, he could very well be a top 10 fantasy tight end.

Eagles tight end Dallas Goedert caught four of his 10 targets for 65 yards in Sunday's win over the New York Giants.

With Zach Ertz sidelined, Goedert led the Eagles in targets on Sunday. He was only able to haul in four of his 10 targets, limiting his production on the day. With Ertz suffering a lacerated kidney in addition to broken ribs, Goedert could once again be in line for an increased workload in next week's matchup against the Seahawks at home.

Eagles tight end Dallas Goedert caught nine of his 12 targets for 91 yards and a touchdown in Sunday's win over the Dallas Cowboys.

With the Eagles dealing with so many injuries on offense, Goedert has been playing more snaps and seeing more targets in recent weeks. He has at least six targets in six straight games, finding the end zone twice during that span.

Eagles tight end Dallas Goedert caught five of his six targets for 55 yards in Sunday's win over the Washington Redskins.

With the Eagles continuing to deal with injuries to their wide receivers, Goedert's role continues to increase. He has now been targeted at least six times in five straight games, although he has scored just one touchdown during that span.

Mike Maher - The Birds Blitz29 weeks ago
Who Should I Draft?
Most Accurate Experts
for Dallas Goedert
Do Not Sell
Are you looking to contact Customer Support about a subscription or account related question?
Yes
No, I'm a California resident looking for the California Consumer Privacy Act form