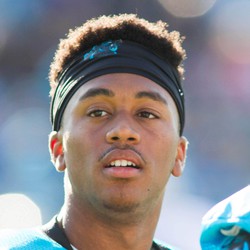 Byrd spent 2019 with the Cardinals, catching 32 passes in 11 games. The 27-year-old isn't expected to make a fantasy impact in New England. It's unclear who his quarterback will even be right now.

Damiere Byrd caught seven passes for 74 yards and a score in the Cardinals' Week 17 loss to the Rams.

The touchdown was the first of the season for the 26-year-old. Byrd wasn't a fantasy factor this year and doesn't figure to be in 2020 either.

Damiere Byrd caught two passes for 18 yards in the Cardinals' 31-9 Week 8 loss to the Saints.

Byrd saw five targets, which was one more than Larry Fitzgerald. However, he still isn't a fantasy factor right now.

Arizona Cardinals receiver Damiere Byrd hauled one of his two targets for four yards receiving in Week 7 against the New York Giants.

Despite placing second on the team with 80 percent of the snaps, Arizona Cardinals wide receiver Damiere Byrd saw just two targets in Week 7. It was a slow day at the office for Arizona Cardinals skill players not named Chase Edmonds. While Edmonds dominated on the ground, Kyler Murray put up just 104 passing yards. With Christian Kirk seemingly nearing a return, Byrd is nothing more than an ocean deep league bye week filler.

Damiere Byrd caught both of his targets for 60 yards in the Cardinals' Week 6 win over the Falcons.

It was a nice game for Byrd, but he doesn't have much fantasy value moving forward. Larry Fitzgerald, Christian Kirk, and David Johnson are the only skill players who can be relied on in fantasy on this team.

Brendan Tuma - Too Much Tuma39 weeks ago
Who Should I Draft?
Most Accurate Experts
for Wide Receivers
Do Not Sell
Are you looking to contact Customer Support about a subscription or account related question?
Yes
No, I'm a California resident looking for the California Consumer Privacy Act form