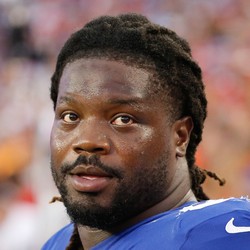 Damon "Snacks" Harrison was a big part of the team's improved run defense prior to 2019 after coming over the from Giants, but he struggled largely last season. He currently hopes to return for the 2020 season, but the interest he drives on the market will likely dictate whether he will suit up or not this year.

Lions defensive tackle Damon Harrison is inactive for the team's Thanksgiving Day matchup against the Chicago Bears due to a knee injury that he picked up in last week's game against Washington.

Harrison is one of the league's premier run-stopping defensive tackles, so his absence will give a slight boost to the fantasy values of Chicago running backs David Montgomery and Tarik Cohen.

Damon Harrison finished Monday’s loss to the Packers with three total tackles and one sack.

Harrison has only racked up 13 total tackles and two sacks through Week 6. He can be left on waivers in most leagues.

Harrison sat out the entire offseason program while seeking a new contract. Even when he showed up to training camp, the two sides continued negotiations. Harrison was acquired in a trade with the Giants last season. He will continue to be a significant part of the defense over the next two seasons.

Damon Harrison will be activated off the NFI list, Tom Pelissero reports.

Harrison reported to camp despite contract disputes, but he landed on the NFI list shortly after his arrival due to an undisclosed injury. He'll be with the Lions for the last three weeks of the preseason and ready to go for Week 1 of the regular season.