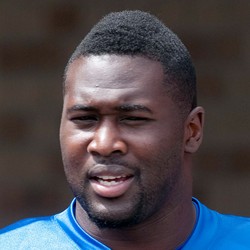 After sustaining his second concussion for 2018, Carolina Panthers strong safety Da' Norris Searcy was replaced by rookie safety Rashaan Gauldin in the loss versus the Atlanta Falcons Sunday.

IDP owners will want to take note of this as it is Searcy's second concussion in just about a month. The NFL protocol concerning these head injuries could have Searcy in jeopardy of playing if he can not fully recover and avoid anymore. Gauldin is likely trending upward as his viable replacement for any time Searcy misses.

Safety Da'Norris Searcy was cleared of his concussion last week and did practice for a couple of days before the third preseason contest versus New England. But he was held out of the contest likely due to the risk he would suffer a setback.

While Da'Norris Searcy's IDP owners should be happy he has returned they will need to monitor his situation until Carolina faces off at home against Dallas. They will also want to keep an eye on the rookie safety Rashaan Gaulden who reportedly had held his own filling in for Searcy during his absence. Although Searcy's starting job is likely secure to begin the season, Gaulden has reportedly performed well enough to garner playing time. Searcy has never had a track record of holding down a starting job for very long in his career, if he falters he might find himself behind the rookie on the depth chart at any point in the season.

On a play in the second preseason contest, strong safety Da'Norris Searcy (concussion) was called for lowering his helmet to initiate contact, as a result, he also sustained the head injury and is now officially in the league's concussion protocol.

Rookie safety Rashaan Gaulden promptly replaced Searcy in the starting line up and played well according to head coach Ron Riveria. Da'Norris Searcy IDP owners will want to monitor his situation going forward. Searcy does have a little history of minor type injuries, but this looks like his first recorded concussion.

Gary VanDyke - The IDP Guys1 year ago
Da'Norris Searcy being evaluated for a concussion.

Rookie safety Rashaan Gaulden getting good work with the first team with Searcy being checked by doctors. Gaulden has turned a lot of heads in camp so far.

The relevant news may be that Rashaan Gaulden is getting an opening to impress. Searcy owners will want to keep an eye on the situation.

Carolina has agreed to a two-year deal with Da’Norris Searcy at $5.7 million.

Searcy should slot in as a starting safety at this time for Carolina pending any further moves. IDP owners will want to take note of the signing as Carolina only has an aging Mike Adams and unproven depth players at this time on the roster at safety.