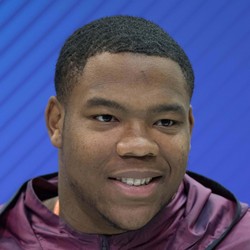 Payne got around right guard Justin McCray before ripping down Aaron Rodgers on the play. It was the type of play the Redskins were expecting when they made him the 13th overall pick in April’s draft. He’s not yet a relevant fantasy option but his career is off to a promising start.

It was an impressive debut. Payne, who returned to practice over the weekend after an ankle injury kept him sidelined for two weeks, battled double teams for most of the night but took advantage of the one-on-one. On his sack of Sam Darnold, Payne showed off his impressive combination of power and quickness to get inside and shake off the block. It’s the type of play the Redskins were envisioning when they selected him 13th overall in April’s draft. He is already expected to be a significant piece of the Washington puzzle.

Payne injured his ankle July 27 when he had it stepped on in practice. While Saturday’s session was not a padded practice, it is still great to see the first-rounder return to the field as he’s expected to be a major contributor as a rookie. He played nose tackle in 11-on-11 drills but has the ability to play multiple roles across the defensive line. It is not yet known if Payne will participate in Thursday’s preseason game against the Jets.

Redskins head coach Jay Gruden told reporters on Saturday that rookie defensive lineman Da’Ron Payne is out of his walking boot and “doing great.” Payne spent Saturday’s practice working on the side with trainers.

While the news is encouraging, Gruden also said it will be another week before Payne will return to full health. The former Alabama defensive lineman injured his ankle July 27 when he had it stepped on in practice. Upon his return, he is expected to be the team’s starting nose tackle and may play multiple roles along the defensive line. Fellow rookie Tim Settle has seen a larger role in Payne’s absence.

Redskins rookie defensive tackle Da’Ron Payne will miss the next two to three weeks after getting his left ankle stepped on in Friday’s practice.

Head coach Jay Gruden said Payne will be in a walking boot for a week, but otherwise doesn’t seem too concerned about the injury. “He's in great shape, so it's not a big deal,” Gruden said. “He's already very smart, knows the defense, so he's in great shape.” Payne, who was selected 13th overall in April, will be the team’s starting nose tackle in 2018. He has already been impressing coaches and teammates with his strength and presence in the middle of the defense throughout offseason and early training camp practices. There is no concern about his readiness to start the season. Tim Settle and Phil Taylor will share time at nose tackle until he returns.