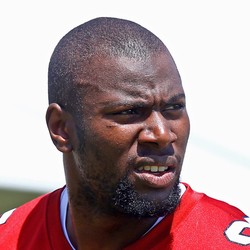 Darren Fells caught three of seven targets for 22 yards and a touchdown on Sunday as the Texans lost to the Chiefs in a Divisional Round matchup by a 51-31 score.

Fells tied a season in targets on Sunday as the veteran tight end has worked his way to the top of the depth chart for the Texans. Fells will battle Jordan Akins and Jordan Thomas in 2020 to see who can get top billing in the offense.

Darren Fells was a late addition to the team's injury report due to a hip injury.

The late addition would seem to indicate that Fells suffered the injury during practice late in the week. As such, his status for the team's game Sunday against the Texans is up in the air. Fellow tight end, Jordan Akins, is also questionable due to an injury. Fells played nearly 100% of snaps in Akins' absence last week, resulting in four receptions on five targets for 37 yards, so if only one of the two suit up this weekend they would make an interesting value play for playoff fantasy purposes.

Darren Fells caught 4-of-5 targets for 37 yards in the Texans' Wild Card win over the Bills by a 22-19 score on Saturday.

Fells had an expanded role on Saturday as fellow tight end Jordan Akins was inactive due to a hamstring issue. If Akins is out again in the Divisional Round look for Fells to be the primary TE once again.

Darren Fells caught all three of his targets for 27 yards in Houston's Week 16 win over the Bucs.

Fells was limited in practice all week but he was able to play on Saturday. The veteran tight end now has 34 catches on the season with seven touchdowns and is only worth owning in deeper fantasy formats.

Darren Fells caught one of two targets for two yards on Sunday as the Texans beat the Titans by a 24-21 score in Week 15 action.

Fells is listed at the #1 tight end on the Texans depth chart. But the veteran is not seeing enough action to be worth owning in fantasy as Fells has just seven catches in his last five games.