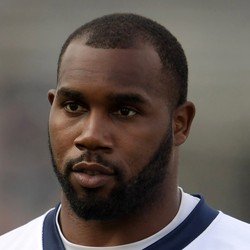 McFadden, who was waived by the Cowboys Monday, announced his retirement from the NFL after 10 years in the league. The 30-year-old rusher will conclude his carer with 7,535 total yards and 33 TDs.

McFadden, who was a healthy scratch for 10-0f-11 games this season, was waived by the Cowboys Sunday. He'll likely catch on with another running back needy team like the Packers sooner rather than later. The Cowboys will continue to employ Alfred Morris and Rod Smith out of the backfield until Ezekiel Elliott is available to return in Week 16.

A healthy scratch yet again, McFadden is out for Thursday's game against the Chargers. He is not worth holding at this point in fantasy. Alfred Morris and Rod Smith are the lead RBs in Dallas while Ezekiel Elliott is out.

Darren McFadden had two rushes for 21 yards in the Cowboys 24-20 win over the Raiders.

Darren McFadden was outshined by Ezekiel Elliott, and that was the reason for the limitation of snaps. McFadden could be a waiver wire pickup for the weeks for Elliott's suspension, whenever that might be.

Ben Siebert2 years ago
Darren McFadden gets 10 touches against Rams

McFadden started and totaled 63 yards on 10 touches Saturday night against the Colts. However, since Alfred Morris also played well, he ran for 49 yards on nine carries, he could push McFadden for the starting job while Ezekiel Elliott serves his six-game ban to open the upcoming regular season. From a fantasy perspective, McFadden will likely emerge as the RB1 over Morris. He is more versatile and is a greater asset in the passing game, which bodes well for his fantasy value. Due to the extensive time Elliott will be out, McFadden is worth reaching for in upcoming fantasy drafts as early as the ninth round, while Morris is currently going undrafted.