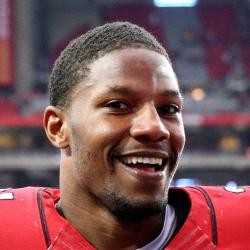 David Johnson is a “three-down back who has had some very productive years,” said Texans Head Coach Bill O’Brien. “The type of guy he is, I’m so excited to have him, Randall Cobb, and Brandin Cooks our locker room.”

Johnson recently passed his physical, clearing the way for him to join the Texans. O’Brien believes he’s a three-down back, and will get plenty of touches in 2020. DJ had a down year in 2019, logging 94 carries for 345 yards to go along with 36 receptions for 370 yards and six total touchdowns (two rushing, four receiving) across 13 games. The 28-year-old will look to bounce back with his new team and is currently 24th among all running backs in the expert consensus rankings.

Mike Garafolo on Twitter is reporting that David Johnson has completed and passed his physical with the Texans.

With DeAndre Hopkins already having passed his physical, the trade between the Texans and the Cardinals should be officially announced soon. Johnson will be in for a huge year for the Texans and should be drafted in the second round in all formats, especially in PPR leagues.

Leonard Grandio7 weeks ago
David Johnson not yet officially a Texan, has not passed physical

RB David Johnson has not yet passed his physical, and thus the trade to Houston in exchange for WR DeAndre Hopkins has not yet been finalized.

Per a source, Johnson has taken a physical on his pre-existing wrist injury, which he passed, but has not yet taken a full body physical that is needed to move forward with the trade. As part of the deal, Arizona is also set to send Houston a second-round pick, and Houston was going to send Arizona a fourth-round pick in addition to swapping players. The draft is set to begin on April 23, and neither Johnson nor Hopkins has passed their physical to date, leaving the trade in limbo with only a few weeks to go. There’s nothing at this point to suggest that Johnson or Hopkins won’t pass a physical in time to process the trade before the draft, but the current landscape surrounding the coronavirus pandemic can’t leave either team feeling 100% confident at this point in time.

The Arizona Cardinals have traded running back David Johnson and a second round pick to the Houston Texans in exchange for DeAndre Hopkins and a fourth round pick, according to a report from NFL insider Adam Schefter.

Johnson was rumored to be a target of the Texans earlier in the day, and trade rumors picked up after the Cardinals placed the transition tag on fellow running back Kenyan Drake. Johnson had a down year under a new regime in Arizona, rushing for 345 yards and two touchdowns on 94 carries and catching 36 passes for 370 yards and four touchdowns. He will get a change of scenery and a chance to start in Houston.

Aaron Wilson of the Houston Chronicle reports the Texans are exploring trade options, including Cardinals running back David Johnson.

Johnson is a candidate to be traded this off-season as the Cardinals seem likely to move forward with Kenyan Drake as their starter. DJ had a wildly disappointing season in 2019 but would be an interesting bounce-back candidate in Houston. Wilson reports that the Texans are one of four teams interested in the running back.

Deposit $10 at a DFS partner site you have NOT played at and get a FREE 6 Month HOF Subscription!
Claim Offer
Who Should I Draft?
Most Accurate Experts
for David Johnson
Consensus Rankings
View All Rankings
Do Not Sell
Are you looking to contact Customer Support about a subscription or account related question?
Yes
No, I'm a California resident looking for the California Consumer Privacy Act form