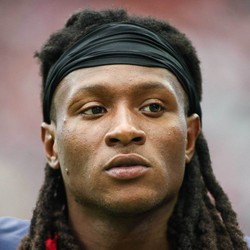 New Cardinals WR DeAndre Hopkins was on the Jalen & Jacoby show on Thursday and said, “I definitely think I’m the best [WR in the NFL].”

Hopkins went on to state that other top WRs Michael Thomas and Julio Jones both benefit from playing with Pro Bowl quarterbacks Drew Brees and Matt Ryan throughout their entire careers. But Hopkins, who’s caught passes from 10 different QBs since being drafted by the Texans in 2013, doesn’t let that cloud his mind. He said, “I don’t complain. I don’t make excuses. I go out there and work.” Hopkins reiterated his excitement in getting to play with Kyler Murray and hopes that he can build chemistry and play with him for more than three seasons. In Kliff Kingsbury’s run-and-gun, pass-happy offense, Hopkins sees his numbers going up from a season ago. He said, "Oh yeah, absolutely. Obviously I've played with a lot of quarterbacks and put up great numbers, being in offenses that necessarily weren't a pass-first offense. So, myself, being a receiver, of course I see my stats going up.” Over his last three seasons in Houston, Hopkins caught over 100 balls in two of them, and went for over 1,000 yards each year. He caught a total of 31 TDs. It’s scary to think what he’ll be able to do in a high-octane offense being led by an up-and-coming quarterback. He’s ranked as the #5 WR in FantasyPros expert consensus rankings, but could easily finish in the top-3 at his position this season should he build chemistry early with Murray.

According to GM Steve Keim, Arizona is committed to signing DeAndre Hopkins to a long-term deal, however nothing is currently imminent.

Keim went on to state that, “Both those guys (Hopkins and RB Kenyan Drake) are guys we’d like to have long-term. I’ve had communication with both their agents. We’ll continue to pound away.” Hopkins currently has three years remaining on his deal, and it seems as if the Cardinals would like to lock him up as soon as possible for as long as possible. It’s not often you can trade for a consistent top-5 WR talent in the NFL, so Arizona will do what they need to do to keep him in town.

DeAndre Hopkins passes his physical, officially clearing the way for him to join the Cardinals.

Hopkins passed his physical on Monday, clearing any hurdles to join the Cardinals. He has only missed two games in his NFL career. Hopkins recorded 104 receptions for 1,165 yards and seven touchdowns across 15 games for the Texans in 2019. Nuk is a surefire top-5 wide-out and is currently 5th among all wide receivers in the expert consensus rankings.

WR DeAndre Hopkins has not yet passed his physical, per multiple sources, and thus the trade to Arizona for RB David Johnson has not yet been finalized.

Neither Hopkins nor Johnson have passed their physical yet, and with the proposed trade including 2020 draft picks, time is running out for the trade to be finalized. The NFL Draft is set to begin on April 23, so both players will have to pass their physicals in the next 18 days in order for the trade to go through. The trade was announced a few weeks ago now, and since that time, the Texans have been bashed for giving up a top-5 WR in Hopkins in exchange for a RB whose career seems to be on the downswing. Nothing suggests that either team is interested in backing off the initial deal, but it’s becoming a time-sensitive matter since draft picks are also included in the trade.

The Cardinals have told reporters that they have had discussions with DeAndre Hopkins’ representation about the wide receiver's contract.

It seems that this is still very early, but Hopkins has made it known that he wants top dollar in a new deal. Still, the Cardinals have Hopkins under control for several more years at a very team-friendly total, so it's to be determined how quick they are to move on this. Whatever the case, Hopkins should continue to be one of the top receivers in the league despite changing teams this offseason.

Deposit $10 at a DFS partner site you have NOT played at and get a FREE 6 Month HOF Subscription!
Claim Offer
Who Should I Draft?
Most Accurate Experts
for DeAndre Hopkins
Consensus Rankings
View All Rankings
Do Not Sell
Are you looking to contact Customer Support about a subscription or account related question?
Yes
No, I'm a California resident looking for the California Consumer Privacy Act form