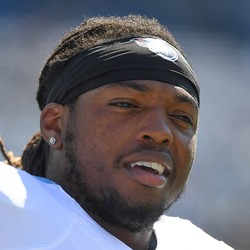 "We'll see how the season evolves for him and if another running back emerges" Smith added. It sounds as if Henry's nonexistent role in the passing game won't be getting any bigger this year. Tennessee famously rode "The Big Dog" throughout the second half of last year and into the playoffs, routinely giving him 25+ carries per game. Smith's comments certainly makes it sounds as if Henry's fantasy value will be dependent on game flow but we already knew that. Rookie Darrynton Evans will likely be the team's third-down back in 2020.

The Titans and Henry are eager to come to terms on a long-term deal prior to July 15. Nevertheless, he’ll be the focal point of the Tennessee offense in 2020.

Henry and the Titans weren’t able to come to a long-term agreement before the deadline, so instead the franchise tag was used. For all intents and purposes, the tag was used by Tennessee to keep Henry from reaching free agency in hopes of eventually being able to reach an agreement on a multi-year deal. The Titans will at a minimum have King Henry for one more season, but hope to have his services for many more years to come. He’s considered a fringe top-5 RB for the upcoming year after he went bonkers in 2019 with a career-high 1,540 yards on 303 carries (5.1 avg.) and 16 TDs on the ground.

The Titans have placed their franchise tag on Derrick Henry, per ESPN’s Adam Schefter.

Henry is coming off a monster 2019 season. He logged 303 carries for 1,540 yards and 16 touchdowns across 15 games. Henry will once again continue to his role as the Titans lead back, and is currently fifth among running backs in the expert consensus rankings.

NFL.com reports that the Titans plan to retain free-agent running back Derrick Henry at a "big number."

This isn't surprising given the offseason moves of the team and the important role Henry played in 2019. Henry should continue to be one of the top fantasy running backs if he remains in Tennessee given his usage by the Titans. He's currently the RB5 in our expert consensus rankings.

Deposit $10 at a DFS partner site you have NOT played at and get a FREE 6 Month HOF Subscription!
Claim Offer
Who Should I Draft?
Most Accurate Experts
for Derrick Henry
Consensus Rankings
View All Rankings
Do Not Sell
Are you looking to contact Customer Support about a subscription or account related question?
Yes
No, I'm a California resident looking for the California Consumer Privacy Act form