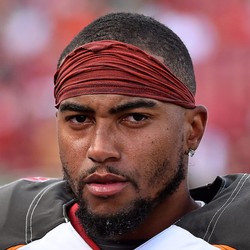 Following core surgery, DeSean Jackson confirmed that he is back to 100%.

Jackson has been plagued by injury recently, but when he's been on the field he's still been a dynamic playmaker despite being 32 years old. Jackson showed that he will have fantasy value in an Eagles' system if he's able to remain healthy. He's currently the WR50 in our expert consensus rankings, but that would figure to climb if he proves healthy and in line for a significant role with the Eagles in 2020.

DeSean Jackson is expected to resume practicing if the Eagles advance to the Divisional round of the playoffs.

First, the Eagles need to make the playoffs by beating the Giants Week 17. They would then need to take on the and defeat the 49ers or Seahawks in Philadelphia for the Wild Card round before moving on to a road game in the Divisional round. If they are able to make it that far, Jackson could return for an Eagles team that is in dire need of offensive playmakers.

This basically ends the season for the 32-year-old wideout. Jackson played in just one full game this year and went 8/154/2 back in Week 1. He'll likely be back with Philadelphia in 2020.

Brendan Tuma - Too Much Tuma30 weeks ago
DeSean Jackson to have surgery, likely done for the season

Eagles wide receiver DeSean Jackson, who has missed most of the season with an abdominal injury but attempted to return in Week 9 against the Chicago Bears, is having surgery tomorrow to repair his core muscle injury and could miss the rest of the season, according to NFL insider Ian Rapoport. Eagles beat reporter John Clark adds that Jackson tore the abdominal muscle completely off the bone yesterday and is expected to miss at least 4-6 weeks.

While this injury is worse than the one Jackson initially suffered in Week 2, the timetable that Clark shared would mean that he might be able to return before the end of the regular season. For fantasy purposes, however, this is disappointing news right when it looked like Jackson was close to returning.

DeSean Jackson exited Sunday's game against the Bears with an injury. His status is questionable to return.

Jackson appears to have re-injured his abdomen, which is what had sidelined him for most of this season. He lasted one series and had one catch before his exit. It's unclear what his status is for the remainder of the game against the Bears, much less next week.

Deposit $10 at a DFS partner site you have NOT played at and get a FREE 6 Month HOF Subscription!
Claim Offer
Who Should I Draft?
Most Accurate Experts
for DeSean Jackson
Consensus Rankings
View All Rankings
Do Not Sell
Are you looking to contact Customer Support about a subscription or account related question?
Yes
No, I'm a California resident looking for the California Consumer Privacy Act form