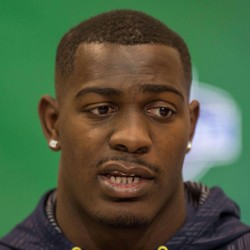 Desmond King had himself a day against the Dolphins, racking up three solo tackles, one assisted tackle, one TFL, 2.5 sacks, two QB hits, and a forced fumble.

Seeing that King has never finished with more than a single sack in a game, this result seems like more of an anomaly rather than a trend. He'll try to back up this performance next Sunday against the Broncos.

Chargers cornerback Desmond King was named AFC defensive player of the week for his Week 9 performance. King recorded three tackles (one solo), two passes defensed, and had a key fourth quarter pick-six in the 25-17 win over the Seahawks.

King returned a Russell Wilson interception 42 yards to give the Chargers a late 25-10 lead. The 2017 fifth-rounder became just the sixth player in NFL history to record multiple pick-sixes and at least four sacks over the first two seasons of his career. King now has 27 tackles, three interceptions, six passes defensed, and two fumble recoveries in eight games (four starts) this season.