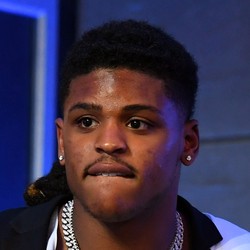 Devin Bush logged four solo tackles, two of which were for a loss, while the Steelers lost to the Bills, 17-10.

Bush again had a minimal impact on this game from a fantasy standpoint and should no longer be relied upon for these last two weeks. Unless drastic changes occur in Week 16 against the Jets, you can be comfortable leaving him on your bench.

Devin Bush recorded a meager stat line of just two assisted tackles in a 23-17 win over the Cardinals.

Bush's impact likely has a lot to do with his snap count, which has been drastically trending downwards in the last five weeks. After playing 50 or more snaps from Weeks 1 to 8, Bush has eclipsed that benchmark only once since then. While it might just be a coaches' decision to utilize more of a rotation rather than an actual decline in productivity, the fact remains that Bush's statistics have decreased significantly. He's not a must-play next Sunday against the Bills.

Bush hasn't had a standout performance since his Week 6 game against the Chargers, and he hasn't surpassed seven combined tackles in a single outing since Week 5. However, he's too talented to pull from your lineups when he and the Steelers take on the Cardinals next weekend.

Devin Bush grabbed three solo tackles, one assisted tackle, one QB hit, and one forced fumble, and the Steelers edged out the Bengals, 16-10.

Bush has averaged just four total tackles over the last three games after averaging just over seven tackles in his first eight games. Though his drop in production is worrisome, he's still a great rookie that is worth considering for your lineups. He'll take on the Browns next Sunday.

Devin Bush logged two solo tackles, three assisted tackles, and one TFL, as the Steelers fell to the Browns, 21-7.

After a fantastic start to the season, Bush has cooled considerably and hasn't hit double-digit scoring since Week 6. Perhaps a game against the lowly Bengals in Week 12 will kickstart a strong finish to the season for the rookie.