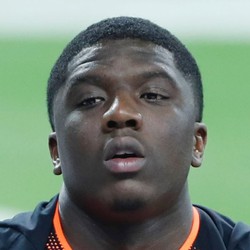 Devin Singletary carried the ball a team-high 13 times for 58 yards (4.5 ypc) and caught six passes for 76 yards (also a team-high), in a playoff overtime loss to the Houston Texans.

A third round selection in last year's draft Devin Singletary concluded his rookie season with another impressive outing posting a career high in yardage (134). In the last nine games of his season Singletary averaged 97.0 yards from scrimmage per game, on 16.0 rushing attempts and 2.9 receptions. Fellow running back Frank Gore is an unrestricted free-agent and will be 37 years old next season. Do not be surprised if the Bills bring in someone new this offseason to compliment Singletary and account for Gore's 166 rushing attempts. Nonetheless, expect Singletary to be considered a RB2 for next season, and be drafted in the early-mid 30's in 0.5 or 1.0 PPR formats.

Devin Singletary is inactive for the Bills' game against the Jets in Week 17.

The Bills are resting several starters on offense, as they have nothing to play for heading into the playoffs. Expect Frank Gore and T.J. Yeldon to lead the way in the backfield.

Devin Singletary rushed 15 times for 46 yards and caught his only target for two yards in the Bills' Week 16 loss to the Patriots.

Singletary received all the running back touches in this game, after continuing to totally take over the backfield throughout the season. Singletary was not used heavily in the passing game though, which is a concern for his fantasy value. For Week 17, Singletary will need to see more targets given that the Jets have a very strong run defense. It will be tough sledding for the rookie running back.

Devin Singletary rushed 21 times for 87 yards and caught two of his three targets for two yards in the Bills' Week 15 win over the Steelers. Singletary also fumbled once.

It was a tough outing for Singletary, who was relatively inefficient on the ground, not active in the passing game. The fumble was the icing on a dud game for fantasy purposes. Singletary at least has clearly reliable volume at this point, and should be a volume-fueled RB2/Flex in a bad matchup for Week 16 against the Patriots.

Devin Singletary rushed 18 times for 89 yards and caught six of his eight targets for 29 yards in the Bills' Week 14 loss to the Ravens.

Singletary was essentially a full-blown bellcow in this game, with Frank Gore getting just four carries, albeit one near the goal line. The eight targets for Singletary is a huge number, and an extremely positive indicator moving forward. Even in tough matchups for the next two weeks (PIT, NE), look for Singletary to slot in as a nice RB2 option.