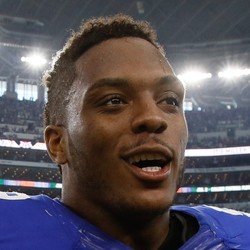 Kennard leads all Lions in sacks with six through Week 12. He also has 39 total tackles and one forced fumble to his name. He is a deeper IDP stash at the present time.

Andrew Liang32 weeks ago
Devon Kennard comes away with another sack

Devon Kennard ended Sunday’s loss to the Cowboys with two solo tackles and a sack.

Kennard is tied with Trey Flowers for the most sacks on the Lions. Kennard has 37 total tackles and five sacks through Week 11. He can be left on waivers in most IDP leagues.

Kennard is currently tied for third on the team in total tackles with 28 through Week 8. He also has three sacks at this point in the season. Kennard should only be considered a starter in super deep IDP leagues.

Devon Kennard was a force on the field Sunday compiling four total tackles and three sacks during the 27-27 tie against the Cardinals.

It's hard to repeat a multiple sack performance week after week but it's also hard to ignore what Kennard did today. Look to add Kennard as the Lions take on the Chargers next week.

Devon Kennard ended Sunday's win over the Panthers with four tackles, three were solo efforts and his sixth sack on the season.

Kennard has shown some flashes this season but unless playing in a super deep league, he should be kept on waivers. He is an LB2 at best with the upside for a possible sack.

Andrew Liang2 years ago
Who Should I Draft?
Most Accurate Experts
for Linebackers
Do Not Sell
Are you looking to contact Customer Support about a subscription or account related question?
Yes
No, I'm a California resident looking for the California Consumer Privacy Act form