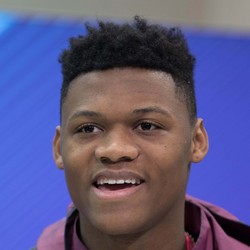 Yahoo
95%
ESPN
95%
FanDuel
View
DraftKings
View
D.J. Chark to be featured all over the formation, including the slot

New Jaguars offensive coordinator Jay Gruden says D.J. Chark will be featured all over the formation this year, including the slot.

Chark already ran 24% of his routes out of the slot last season so this might mean a major change in his role. However, it's nice to hear that Gruden wants to line him up in different spots throughout the season. The 23-year-old wideout went over 1,000 yards and scored eight touchdowns in 2019.

Brendan Tuma - Too Much Tuma7 weeks ago
D.J. Chark hauls in four passes in win on Sunday

D.J. Chark hauls in four passes for 34 yards on five targets Sunday in the Jaguars’ Week 17 victory over the Colts by a 38-20 score.

Chark had a fairly quiet game but was able to go over 1,000 receiving yards for the season. The second-year receiver led the Jags in both receiving yards (1,008) and touchdowns (eight) while placing second to Leonard Fournette in catches with 73.

D.J. Chark caught two of seven targets for 18 yards as the Jaguars lost to the Falcons by a 24-12 score in Week 16 action.

Chark was limited practices this past week with an ankle issue but was able to suit up on Sunday for the Jaguars. The 23-year-old receiver struggled for fantasy owners missing five passes. Chark should be left on the bench in standard leagues in Week 17.

D.J. Chark (ankle) is listed as active for Sunday's game against the Falcons.

Chark who practiced in full this week is listed as active and will play in Sunday's contest against the Falcons. He is 44 yards away from his first 1,000 yard season, expect Chark to be targeted heavily Week 16. Chark is a borderline WR2 against a beatable Falcons secondary.

While Chark missed last week's win over the Raiders with an ankle injury that was expected to sideline him for an extended period, he is trending in the right direction to play in Sunday's matchup at the Falcons despite being listed as questionable on the injury report. If Chark plays, which is the expectation, he will bring a high boom or bust variance into a middle-of-the-road matchup facing a Falcons secondary that has been extremely Jekyll and Hyde in 2019. Chark is a high-ceiling play for Week 16 whose floor may be capped due to his injury. If his ankle flares up, he could be limited or taken out of the game. However, because his upside is so high, you may have to risk it in your fantasy championship matchup, especially if you are entering Sunday trailing big following Saturday's Saturday slate of games.

Anthony Cervino - Anthony Cervino29 weeks ago
Who Should I Draft?
Most Accurate Experts
for D.J. Chark
Do Not Sell
Are you looking to contact Customer Support about a subscription or account related question?
Yes
No, I'm a California resident looking for the California Consumer Privacy Act form