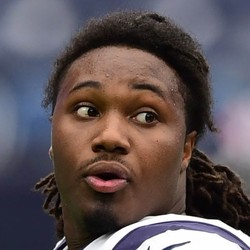 D’Onta Foreman was waived by the Colts from IR with an injury settlement.

Foreman was placed on the injured reserve with a torn biceps earlier this month. He was under contract until the 2020 season with the Colts, but the team has decided to move on by releasing him. Foreman will hope to latch onto another team as he continues to recover from a torn biceps. He has a lot of upside, but his career has been derailed by injuries.

D’Onta Foreman (biceps) was placed on the injured reserve due to torn biceps.

Once touted as a candidate to replace Lamar Miller in the Houston backfield, he was waived by the Texans, then scooped up by the Colts. Foreman faces a four-month recovery period, but on the plus side a full recovery is expected. It remains to be seen if playing at some point late this season is a possibility for him, but either way, he is under contract with the Colts through the 2020 season.

D'Onta Foreman lost a yard on his only carry and caught his only target for a six-yard gain during Saturday's 21-18 win over the Colts.

Foreman got into his first preseason game with his new team after getting released by the Texans. The 23-year-old running back should back up Marlon Mack this season and is only worth owning in fantasy leagues as a handcuff.

D'Onta Foreman has been claimed off of waivers by the Indianapolis Colts. Foreman was recently waived by the Houston Texans.

After an unproductive 2018 due to an achilles tear, D'Onta Foreman finds himself on a potent fantasy offense with the Indianapolis Colts. Marlon Mack and Nyheim Hines have already established roles in the Colts backfield, but Foreman could be an interesting option if anything were to happen to Mack.

The Texans placed RB D’Onta Foreman on waivers. They weren’t happy with his work habits according to John McClain of the Houston Chronicle.

This is surprising news as Foreman was just coming back from an injury that cost him most of last season. It looks like the RB position is wide open at the moment with Lamar Miller looking like the starter and Josh Ferguson the #2 on the depth chart.

Deposit $10 at a DFS partner site you have NOT played at and get a FREE 6 Month HOF Subscription!
Claim Offer
Most Accurate Experts
for D'Onta Foreman
Consensus Rankings
View All Rankings