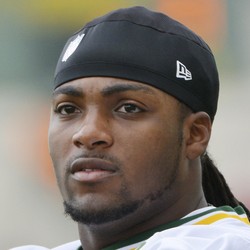 DuJuan Harris was cut by the Jacksonville Jaguars.

Harris was a long shot to be a fantasy asset with the Jaguars. Corey Grant took the backup third down back behind TJ Yeldon. Grant's big plays in the first preason game made Harris expendable.

DuJuan Harris rushed seven times for 26 yards against the Atlanta Falcons in the preseason game 4.

Harris is likely on the roster bubble with the depth that the Jaguars have at the running back position. If Harris makes the team, he will be used when TJ Yeldon can't play.

DuJuan Harris signed to the Jacksonville Jaguars after being released by the San Francisco 49ers.

Harris was added for RB depth with Leonard Fournette's foot injury and Chris Ivory's injury history. Harris has shown the ability to have fantasy impact as a spot start. Harris would need a ton of things to go his way to be worth a bench spot.

The San Francisco 49ers have released running back DuJuan Harris on Monday.

One week after cutting Mike Davis, the rebuilding 49ers have released another running back Monday, parting ways with Harris. With both Smith and Harris gone, San Francisco's running back depth chart is beginning to shape up. Carlos Hyde is on track to open the upcoming season as the starter with Tim Hightower serving as his primary backup. Rookie Joe Williams and Kapri Bibbs will likely fill in the remaining spots for 2017. For Harris, he'll likely sign with a running back-needy club in time for training camp and compete for a roster spot.

The 49ers have re-signed Dujuan Harris to a one-year deal. Harris will have the inside track to win the RB2 spot on the 49ers roster.

With the departure of Shaun Draughn earlier this offseason, Harris will back up the oft-injured Carlos Hyde in new coach Kyle Shannahan's offense that utilizes two backs. He has shown to be productive when filling in for Hyde in the past and has a similar skill set to Hyde, and the two are setting up to be the poor man's version of Devonta Freeman and Tevin Coleman. Harris figures to be a fantasy asset, or at the very least a must-own handcuff.