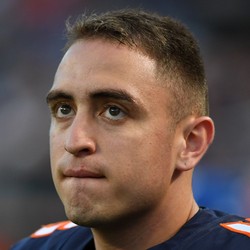 Eddy Pineiro connected on all four of his field-goal attempts and his only extra-point attempt in the Bears’ 21-19 win over the Vikings on Sunday.

Pineiro ended the year strong, drilling all five of his kicks in Sunday's narrow victory, including the game-winning 22-yarder. Pineiro struggled through much of the year, and his status for 2020 is uncertain at this time.

Eddy Pineiro made his only field-goal attempt in the Bears’ 26-3 loss to the Chiefs on Sunday.

He only got one chance at a kick Sunday, though Pineiro made it count with his 46-yarder. His were the only points scored by Chicago in the ugly SNF loss. Pineiro has bounced back over the last few weeks after a rocky start to the season, and he'll look to end on a high note against Minnesota in Week 17.

Eddy Pineiro made both of his field-goal attempts and his only exta-point attempt in the Bears’ 21-13 loss to the Packers on Sunday.

The first-year Bears kicker was perfect for the third straight game, nailing all three of his kicks in Sunday's loss. He had plenty of struggles throughout the year but has turned it around across his last three contests. He'll have a good chance to keep up this level of play in Week 16 against Kansas City.

Eddy Pineiro made his only field-goal attempt and all four of his extra-point attempts in the Bears’ 31-24 win over the Cowboys on Thursday.

Pineiro was perfect for the second week in a row, nailing all five of his kicks in Thursday's win. He's struggled all season, and it's still hard to trust him on a weekly basis. With tough matchups in Green Bay and Kansas City on the horizon, Pineiro doesn't have a lot of upside for the remainder of the fantasy playoffs.

Eddy Pineiro made his only field-goal attempt and all three of his extra-point attempts in the Bears’ 24-20 win over the Lions on Thanksgiving.

After some poor kicking as of late, Pineiro came through with a perfect performance. He may be especially needed in a tough matchup with Dallas next week.

Deposit $10 at a DFS partner site you have NOT played at and get a FREE 6 Month HOF Subscription!
Claim Offer
Who Should I Start?
Most Accurate Experts
for Eddy Pineiro
Consensus Rankings
View All Rankings