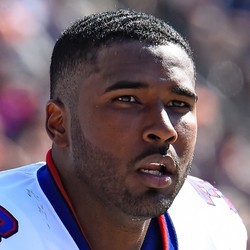 EJ Manuel completed 8-of-12 passes for 87 yards in the Raiders' 13-6 preseason win over the Packers Friday night. He added four rushes for 21 yards.

Manuel led the drive that won the game for the Raiders on a touchdown run by Chris Warren with five minutes to go. Neither Manuel nor Connor Cook have inspired confidence as backups to starter Derek Carr this season. It would not be surprising for the Raiders to pursue another veteran backup to open the season.

EJ Manuel underwhelmed in the Raiders' Week 5 loss to the Ravens. He went 13-of-26 for 159 yards with one touchdown. He added two rushing attempts for 15 yards.

It sounds like Derek Carr should be back next week, so Manuel's brief cameo as the Raiders' quarterback should be over. Even if Carr misses another game, Manuel isn't a fantasy option outside of two-QB leagues.

With the Derek Carr injury news, EJ Manuel is now slated to start at quarterback for the Raiders against Baltimore.

Manuel has been in the league for a while now, and has shown signs that he can be an adequate backup quarterback. The matchup will be tough for him on Sunday, but there are good weapons on Raiders roster for him to be competent. Manuel is a stay away in fantasy this week, as the Raiders will probably ask him to be a game manager while they lean heavily on the run.

Manuel, a former first-round pick of the Bills, signed with the Raiders Thursday. He'll likely compete with Connor Cook for the No. 2 quarterback spot on the depth chart behind starter Derek Carr.

Buffalo Bills beat writer Jay Skurski does not expect the team to retain quarterback E.J. Manuel. "Manuelâ€™s time with the Bills should be over," Skurski said via the Buffalo News. "His legacy will be that of a first-round draft bust, even if itâ€™s not his fault the Bills reached for him."

Manuel, an impending free agent, is unlikely to be retained by the Bills this offseason. The former 16th overall pick in the 2013 draft has never lived up to expectations and is labeled by most as a bust. He will likely compete for a backup role with another club for 2017.