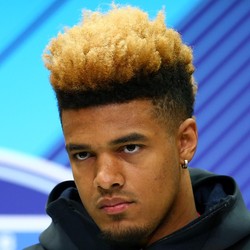 Equanimeous St. Brown (ankle) was placed on the injured reserve, ending his season.

St. Brown could have been brought back if he was included on the original 53-man roster prior to being placed on the injured reserve. He was originally supposed to miss four-to-six weeks, but ultimately the Packers decided to shut him down. The move clears a roster spot for undrafted free agent Darrius Shepherd.

St. Brown injured his ankle in Thursday night's preseason game in Canada. And after undergoing an MRI which came back negative, the second-year wideout was diagnosed with a high ankle sprain, which is expected to sideline him for over a month and into the regular season. Jake Kumerow is expected to take St. Brown's place as the WR4.

Equanimeous St. Brown came up empty-handed on one target Thursday.

St. Brown was targeted just once and finished the game with a goose egg in the receiving column. He’s clearly behind Davante Adams, Geronimo Allison and Marquez Valdes-Scantling in the pecking order, and he’ll have little fantasy value, even in deeper leagues.

Equanimeous St. Brown is doubtful to play Week 17 due to his concussion.

St. Brown posted solid numbers Week 16, but it appears that he'll miss the finale. The rookie has seen more snaps over the course of the season, but his role entering 2019 isn't clear at this point given the number of young receivers in Green Bay. Davante Adams is also on the injury report, though he's expected to play at least some of Sunday's game. Randall Cobb is slated to return, and Marquez Valdes-Scantling and Jake Kumerow should also be involved for the Packers.

Equanimeous St. Brown had five receptions for 94 yards on five targets in Week 16 against the Jets. He left the game with a concussion after a big hit that drew a flag in the fourth quarter.

With just one week to go, St. Brown will likely be held out when the Packers host the Lions next week. That should lead to more targets for Marquez Valdes-Scantling and Jake Kumerow in the season finale.