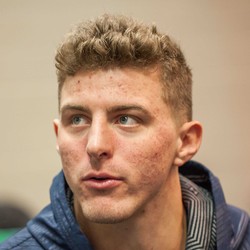 Eric Saubert caught one of his two targets for seven yards in the Patriots' preseason loss to the Giants.

Saubert is likely on the chopping block for final roster cuts and offers no fantasy appeal. He is unlikely to contribute in the regular season on the Patriots or any other team.

Eric Saubert caught one of his two targets for 10 yards in the Patriots' preseason win over the Titans.

In Saubert's debut, one may have expected more usage. He's worth keeping an eye on in the next two games, but is unlikely to earn a starting role this season, even if he makes the final roster.

Third-year tight end Eric Saubert has been traded to the Patriots in exchange for a conditional seventh-round pick, Adam Schefter reports.

The move comes just four days after fellow Patriots’ TE Matt LaCosse suffered a lower leg injury in Thursday’s preseason win against Detroit. LaCosse’s prognosis is yet unclear, but Saubert’s acquisition was a necessary move for depth purposes, regardless. He’ll join a crowded, yet unspectacular stable of tight ends in New England, including Ben Watson and Lance Kendricks, among others.