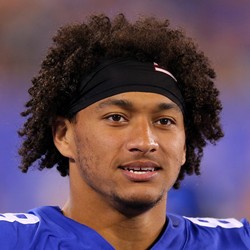 Evan Engram (foot) posted a video on his personal Instagram account of him running and working on his footwork.

Engram underwent surgery on his left foot in December. He posted a video of himself running for the first time since the surgery. It is unclear at this time if Engram will be ready by training camp, but this is a step in the right direction. The Giants picked up his fifth-year option this off-season and he is expected to play a key role in New York's offense in 2020. He hauled in 44 receptions for 467 and three TDs across eight games in 2019. Engram is TE1 and is currently sixth among all tight ends in the latest expert consensus rankings.

The New York Giants have picked up the fifth-year option on TE Evan Engram’s rookie contract.

Engram was in trade rumors as recently as last month when it was reported that the 49ers were interested. But now the Giants have picked up the tight end’s fifth-year option, most likely keeping him in New York through the 2021 season. Engram only played eight games last year, but he was on pace for almost 1,000 yards. He finished the season with 44 receptions for 467 and three TDs. He’s a sure-fire TE1 heading into the 2020 season and should be drafted in tier 2 just after the likes of Travis Kelce, George Kittle, Mark Andrews, and Zach Ertz in fantasy leagues.

Adam Koffler9 weeks ago
Evan Engram reportedly being targeted by the 49ers in trade?

The 49ers have shown interest in acquiring TE Evan Engram from the Giants.

The 49ers are looking to upgrade star TE George Kittle’s backup, and are interested in acquiring Engram from the Giants. The 25-year-old had Lisfranc surgery on his left foot back in December, but should be all systems go when the regular season starts. Engram hauled in 44 catches for 467 yards and three touchdowns across eight games last season. He has missed 14 contests in his career due to multiple injuries. Engram is currently ranked seventh among all tight ends in the expert consensus rankings, but a move to the 49ers would significantly decrease his fantasy value.

Evan Engram is still in a walking boot following surgery on his foot.

Engram's 2019 season was ended early due to the foot injury that required surgery. While he will miss time this offseason, he should be ready to go for training camp and full-go for the 2020 season. He'll continue to be one of the top fantasy tight ends in the league once fully healthy. He's currently the TE7 in our early expert consensus rankings.

The Giants placed Evan Engram on season-ending IR with a foot injury.

Engram was off to a sensational start this season but this foot injury really ruined what could've been an extremely promising year. He finishes with 467 yards and three touchdowns in eight games. The 25-year-old will be a name to monitor in 2020 fantasy drafts as he could easily pick up where he left off in early-November.

Brendan Tuma - Too Much Tuma28 weeks ago
Who Should I Draft?
Most Accurate Experts
for Evan Engram
Do Not Sell
Are you looking to contact Customer Support about a subscription or account related question?
Yes
No, I'm a California resident looking for the California Consumer Privacy Act form