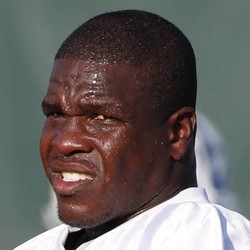 Frank Gore received an offer from the Raiders, before ultimately agreeing on a one-year deal with the Jets.

The details of what the Raiders offered Gore is unknown, but his familiarity with Adam Gase's offense led the veteran RB to sign with the Jets. The ageless wonder logged 166 carries for 599 yards and two touchdowns across 16 games for the Bills last season. Gore will likely cut into some of Le'Veon Bell's carries and could get some goal line touches. He needs 1,379 more yards to pass Walter Payton on the all-time rushing leader-list. Gore is currently 109 among all running backs in the latest expert consensus rankings.

Free agent veteran riunning back Frank Gore has signed a one-year deal with the New York Jets, where he will be re-united with former head coach Adam Gase.

Just days after Gase said that he wants a "1-2 punch" with running back Le'Veon Bell, the Jets signed Gore to a one-year contract. The 36-year-old back out of Miami is currently third on the all-time rushing leader list and can pass up Walter Payton with 1,379 more yards, a goal he assuredly has his sights on. Gore is coming off the lowest rushing total (599 yards) and lowest yards per carry (3.6) of his 15-year career. He is in the twilight of his career and probably won't see over 200 carriers this season, but he will probably see some goal-line work and could end up in fantasy discussion is Bell is unable to play. Right now he's ranked 109th in our expert consensus rankings and should only be drafted as a handcuff for Bell.

Frank Gore plans to continue to play in 2020, according to NFL Network.

It was recently reported that the Bills do not intend to bring back the veteran Gore, but it appears that he will attempt to continue to play in 2020. Of course, he'll need to find a team that's interested in having him, which hasn't been a problem over the last few years that he's bounced around in various roles. While his durability and longevity are certainly impressive given the violent nature of the sport, Gore doesn't figure to have a fantasy-relevant role in 2020.

Blaine Blontz12 weeks ago
Frank Gore not expected back in Buffalo

According to The Athletic, the Bills are not expected to bring back veteran running back Frank Gore.

This is not surprising, as Gore is reportedly considering retirement. While he will go down as one of the great running backs in history, if for no other reason than his durability and longevity, Gore's days as a fantasy-relevant player are over, even if he returns in 2020.

Frank Gore rushed the ball eight times for for only 22 yards (2.8 ypc) in the Bills playoff loss the the Texans on Saturday afternoon. One of his two second half rushing attempts went for 14 yards; which means his other seven rushing attempts netted only eight yards. He also failed to corral his lone pass target.

Frank Gore finished the regular season with 166 rushing attempts for 599 yards on a career low 3.6 yards per carry. He scored twice on the ground and caught 13 passes for 100 yards. Gore, who will be 37 years old next season, is an unrestricted free agent.

Deposit $10 at a DFS partner site you have NOT played at and get a FREE 6 Month HOF Subscription!
Claim Offer
Who Should I Draft?
Most Accurate Experts
for Frank Gore
Consensus Rankings
View All Rankings
Do Not Sell
Are you looking to contact Customer Support about a subscription or account related question?
Yes
No, I'm a California resident looking for the California Consumer Privacy Act form