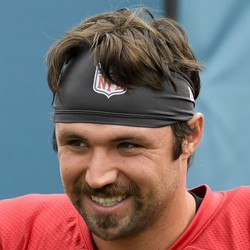 Gardner Minshew is “accurate, tough, and obviously he’s a great leader so he’s got the intangibles you want in a QB,” said Jaguars’ OC Jay Gruden.

Minshew led the Jaguars to a 6-6 record across 12 starts. “He has shown a skillset where he can sit in a pocket, step up, make things happen outside the pocket,” Gruden added. The Jaguars did sign QB Mike Glennon this off-season, but HC Doug Marrone confirmed that Minshew was “no doubt” the starting QB. The 24-year-old threw for 3,271 yards with a 21:6 TD:INT ratio across 14 games. Minshew is currently 24th among all quarterbacks in the latest expert consensus rankings.

According to rumors swirling around the Jaguars, the team is looking to add a veteran quarterback and have been linked to recently released Andy Dalton. With Marrone stating his claim that Minshew is his QB, any veteran that’s acquired should be in a reserve role. Minshew is considered a mid to low-end quarterback two for 2020 and would be a owned in all 2QB, super flex, and dynasty leagues.

Leonard Grandio9 weeks ago
Gardner Minshew: Jaguars want to give him 'a real shot'

Peter King of NBC Sports writes that the Jaguars have no plans to take a quarterback with the ninth overall pick and "want to give Gardner Minshew a real shot".

This report is backed up by the Jaguars' moves this off-season. The team traded Nick Foles to the Bears and have not been linked to any of the top quarterbacks in the upcoming draft. Minshew showed some competency at times in the 2019 season but lacks elite athleticism and playmaking ability. Expect Jacksonville to remain a run-first team with Minshew under center in 2020.

With Nick Foles being traded to Chicago, Gardner Minshew is expected to be the Jaguars' starter in 2020.

Minshew took the league by storm last season after newly-acquired free agent Foles went down Week 1 with a broken clavicle. Through his first five weeks he was unstoppable, averaging 255.8 yards per game while throwing nine touchdowns and one pick. Over the next four weeks he cooled down a bit, averaging 251.5 yards to go with four touchdowns and three interceptions. The starting job was given back to Foles who looked abysmal in his return. Monshew took the job back in the middle of week 13 and finished the season averaging 197.2 yards and throwing eight touchdowns and two interceptions over that span. That type of volatility is to be expected from a rookie, especially one drafted in the sixth round. One thing is for certain though; Minshew has a cannon and isn't afraid to use it. Surely, Minshew-mania will come back this offseason and he will creep up draft boards, but temper expectation for the sophomore quarterback and expect him to be a low-end QB2.

Gardner Minshew completed 27-of-39 passes for 295 yards with three touchdowns and one interception while rushing for an additional seven yards on five rushing attempts Sunday in the Jaguars’ Week 17 win over Indianapolis.

Minshew entered the game nursing an injured shoulder but looked great in the last game of the season for the Jaguars. Look for Minshew to battle Nick Foles for the starting QB job going into 2020 and could be the favorite to win.

John Aubin27 weeks ago
Who Should I Draft?
Most Accurate Experts
for Quarterbacks
Do Not Sell
Are you looking to contact Customer Support about a subscription or account related question?
Yes
No, I'm a California resident looking for the California Consumer Privacy Act form