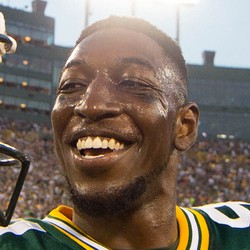 Geronimo Allison has agreed to a one-year, $910K deal with the Lions.

Allison hauled in 34 receptions for 287 yards and two touchdowns across 16 games for the Packers in 2019. He will slot in as the Lions third wide receiver behind Kenny Golladay and Marvin Jones. Allison is currently 101 amongst all wideouts in the expert consensus rankings. The move to the Lions does not improve his fantasy value, and he is mainly a dynasty/deep-league stash.

Geronimo Allison caught his only target for 11 yards in the Packers’ 28-23 win over the Seahawks on Sunday.

Allison didn't get much attention Sunday, as he came away with only 11 yards in the victory. With Davante Adams a complete siphon for the majority of Aaron Rodgers' targets, Allison and others don't have much of a role in the receiving game.

Geronimo Allison brought in three of four targets for 17 yards in the Packers’ 23-20 win over the Lions on Sunday.

Allison failed to live up to the preseason hype he was given as the Packers' potential No. 2 option. He ends the year with a pedestrian 34/287/2 receiving line.

Geronimo Allison caught two of four targets for 19 yards in the Packers’ 21-13 win over the Bears on Sunday.

Allison continues to be a non-factor in Green Bay's offense, posting middling results on a weekly basis. He's clearly behind Davante Adams, Allen Lazard and Aaron Jones/Jamaal Williams, and the targets just haven't been there for Allison to make any significant contributions. Nothing more to see here, folks.

Geronimo Allison continues his disappointing season for the Green Bay Packers. Expected to be a potential top-30 producer coming into the season, Allison has been ocean deep league bench depth at best. Allison was second on the team with 58 percent of the wide receiver snaps in Week 14, but tied for the fewest targets on the team. With Aaron Jones, and Allen Lazard ahead of him on the target totem pole, on what has often times been a running back centric offense, Allison should not be trusted during the final weeks of the fantasy football playoffs.

Deposit $10 at a DFS partner site you have NOT played at and get a FREE 6 Month HOF Subscription!
Claim Offer
Who Should I Start?
Most Accurate Experts
for Geronimo Allison
Consensus Rankings
View All Rankings