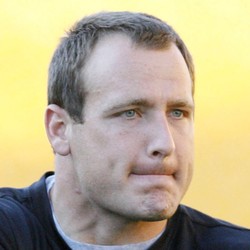 Heath Miller announced his retirement on Friday after 11 seasons in the NFL.

Heath Miller retired after 11 seasons in the NFL leaving a void at the tight end position in Pittsburgh. The Steelers are likely to address this via free agency or the draft this offseason.

Heath Miller finished with two catches for nine yards on only three targets in Saturday's win over the Bengals.

Miller had found success in the team's first two matchups against the Bengals, but he was essentially a non-factor Saturday. While Miller had some solid games this season considering his modest cost, he has a tough matchup against the stout Broncos' defense this weekend.

Steelers TE Heath Miller caught three passes for 18 yards and a touchdown in Pittsburghâ€™s 28-12 victory over the Cleveland Browns in Week 17.

Miller finished the regular season with 57 catches, 517 yards and a TD. A standard season for Miller, expect him to be a top 25 tight end going into drafts next year.

His six targets were tied for second on the team in a game where the offense couldn't get much of anything going. Miller has proved a reliable-yet-underwhelming option with Big Ben under center. He should continue to be a TE2 in the final week of the regular season.

During a 34-27 victory over the Denver Broncos in Week 15, Heath Miller was largely held in check as he caught 3-of-5 targets for 12 total yards. In a game where Ben Roethlisberger threw for 380 yards and three touchdowns, it was clear that Miller was not a huge part of the game plan.

Despite playing in a pass-first offense, Heath Miller is a low-ceiling option to close out the final weeks of the 2015 fantasy season. With Antonio Brown, Markus Wheaton, and Martavis Bryant hogging targets, there just simply isn't enough opportunity for owners to get too excited about the veteran TE.