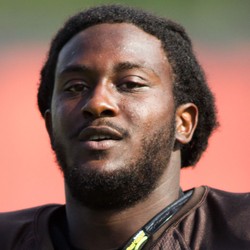 Raiders running back Isaiah Crowell tore his Achilles during a workout with the team Monday and is out for the season, according to a report from ESPN NFL insider Adam Schefter. Crowell signed a one-year deal with the Raiders earlier in the offseason.

Crowell's injury will put added pressure on rookie running back Josh Jacobs, who was just drafted by the Raiders in the first round of last week's NFL Draft. Jacobs now has the inside track with little competition to be a three-down running back for the Raiders, with Jalen Richard likely serving as the occasional pass-catching back out of the backfield. Jacobs should be one of the first players off the boards in upcoming rookie dynasty drafts.

Adam Schefter of ESPN reports Isaiah Crowell and the Raiders have reached an agreement on a one-year, $2.5 million deal.

Crowell was released by the Jets once New York signed Le'Veon Bell. The 26-year-old scored six rushing touchdowns last year but offers little fantasy upside at this point in his career. It's still up in the air if Marshawn Lynch will be returning to Oakland, which could be a major factor in Crowell's workload this season.

This was expected after the Jets signed Le'Veon Bell, as Elijah McGuire is set to be the No. 2 in the Jets' system. Crowell, who ended the year on IR after rushing for 685 yards and six touchdowns, is still just 26 years old. He should likely latch on somewhere as part of a time-share or as a backup.

Dan Harris45 weeks ago
Isaiah Crowell to be placed on IR

The Jets will place Isaiah Crowell (toe/foot) on Injured Reserve, according to Adam Schefter.

Crowell was already ruled out for Week 15, so the move has no immediate fantasy impact, but it certainly makes Elijah McGuire a more attractive option for the season. Even if McGuire struggles on Saturday against the Texans, he'll likely at least be in the Flex conversation for Week 16 against the Packers.

Isaiah Crowell has been ruled out Week 15 due to a foot injury.

Crowell suffered the injury Week 14, and he wasn't able to get ready to play on the short week ahead of Saturday's game. With Crowell being ruled out, Elijah McGuire and Trenton Cannon will share the backfield. Neither are more than fringe flex plays against Houston.

Deposit $10 at a DFS partner site you have NOT played at and get a FREE 6 Month HOF Subscription!
Claim Offer
Most Accurate Experts
for Isaiah Crowell
Consensus Rankings
View all Flex Rankings