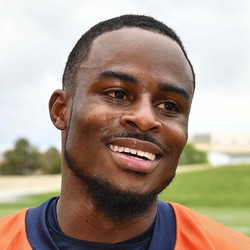 Restricted free agent WR Isaiah McKenzie has agreed to terms with the Buffalo Bills, according to his agency, SportsTrust Advisors.

McKenzie set career highs with Buffalo in 2019, catching 27 passes on 39 targets, for 254 yards and one touchdown. With the Bills off-season addition of Stefon Diggs, McKenzie probably won’t see an increase in playing time on offense, but he could see some added run on special teams. He’ll add depth to a wide receiver core that has some serious talent now.

Isaiah McKenzie caught four of his five targets for 23 yards in the Bills' Wild Card loss to the Texans.

McKenzie is not a reliable offensive weapon for the Bills, and will likely continue to serve as a gadget/role player for 2020 with use on special teams. McKenzie does not figure to be on the fantasy radar in August.

Isaiah McKenzie caught two of his five targets for seven yards in the Bills' Week 17 loss to the Jets. McKenzie also rushed twice for 30 yards.

McKenzie has been a role player and a special teamer for most of his young career. He is signed through next season on his rookie deal, so figures to be back in a Bills uniform, but will be unlikely to see reliable playing time on offense.

Isaiah McKenzie caught both of his targets for 52 yards in the Bills' Week 5 win over the Titans.

There is nothing to see here -- McKenzie is a gadget player who won't play more than a handful of offensive snaps in most weeks. Don't bother with a waiver claim on him unless his role changes.

Isaiah McKenzie rushed once for four yards and caught both of his targets for 40 yards and a touchdown in the Bills' Week 2 win over the Giants.

McKenzie's touchdown came on a sweep where Josh Allen flipped the ball forward to him, a nice gadget play. However, that is McKenzie's role in the offense -- gadget player. McKenzie is primarily used on special teams and has no fantasy value at this point.