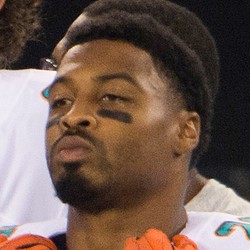 After a solid preseason Pead was unable to capitalize on his opportunity while Arian Foster was sidelined.

This move likely signals that Arian Foster will make his return against the Pittsburgh Steelers.

Isaiah Pead had been dealing with a injured hamstring.

Pead was impressive in the preseason but did not suit up, leaving Damien Williams as the back up for Arian Foster.

Barry Jackson of the Miami Herald reports that Miami Dolphins head coach Adam Gase â€œwould loveâ€ to get RB Isaiah Pead reps with the first-string offense in the third preseason game Thursday against the Atlanta Falcons. Pead was originally signed in the summer as a â€œcamp bodyâ€, but has emerged this preseason for the Dolphins leading the team in rushing during the preseason.

Pead is currently going undrafted in even the deepest leagues; while teammates Arian Foster and Jay Ajayi have ADPs at 70 and 91 respectively. Pead is also currently being drafted behind RBs Kenyan Drake and Damien Williams despite the fact that itâ€™s likely that he has already passed them on the depth chart. While Foster and Ajayi are still clearly ahead of Pead at this point, neither are what you would call â€œsure things.â€ Foster has been one of the most injury prone RBs in the NFL over the past few years, and Ajayi is completely unproven. I would monitor the way that Miami uses Pead during the third preseason game Thursday. If the Dolphins are willing to give Pead valuable first-team carries in what is usually known as the â€œdress rehearsalâ€ preseason game, it is very likely that they are planning on giving him reps during the regular season. If you are in a deep league or a league that has a lot of bench spots, Pead might be a decent stash candidate.

Miami has signed fourth-year running back Isaiah Pead. New head coach Adam Gase has made it known that he wants to have multiple running backs. The Dolphins lost Lamar to free agency, and the Broncos matched an offer sheet presented to C.J. Anderson.

Pead's signing is more of move for depth than a direct challenge to Jay Ajayi. He has only 78 career rushing yards on 19 carries. He also missed the entire 2014 season with a torn ACL. Ohio State's Ezekiel Elliott is a name that keeps coming up as a draft option for Miami.

Reginald James4 years ago
Isaiah Pead released by the Steelers

Pead had been third on the running back depth chart.

This means that Jordan Todman is clearly the second RB and handcuff to DeAngelo Williams. Williams owners who want insurance down the stretch can own Todman; they'll know he would get the touches in the event of a Williams injury.