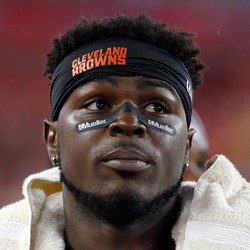 Jabrill Peppers (back) won’t suit up for the Week 13 contest against Green Bay.

Peppers absence will be a blow for a Giants team looking for their third win this season. Michael Thomas would be the next man up for the Giants at SS. Look elsewhere for IDP help, possibly Derwin James from the Chargers.

Peppers is second on the Giants in total tackles with 65 through Week 9. He should be owned in most IDP leagues and can be started weekly.

Jabrill Peppers ended Sunday’s loss to the Lions with five solo tackles and a forced fumble.

Peppers is currently second on the team in total tackles with 53 through Week 8. He should be rostered across all leagues, especially in dynasty formats.

Jabrill Peppers racked up six total tackles (three solo), and a pick-six during Sunday’s 24-3 win over the Washington Redskins. Peppers interception came in the third quarter and occurred because Case Keenum was benched for the rookie Dwayne Haskins.

Peppers should be rostered in most IDP leagues, especially ones that count special team return yards. Peppers currently has 27 total tackles and one interception through the first four weeks of the season.

Jabrill Peppers had seven total tackles in Sunday’s 35-17 loss to the Dallas Cowboys.

Peppers was a force to be reckoned with on Sunday. He is a must-start every week, especially with leagues that require starting a S spot.