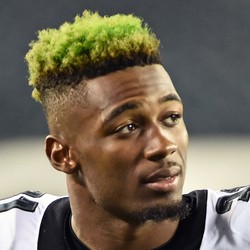 Jalen Mills records six solo tackles and one assisted tackle in the Philadelphia Eagles' Week 7 loss to the Carolina Panthers.

Mills has been an average fantasy safety this year, but he's solid. Continue to start him unless you have an option that's clearly better.

Mills, the 36th-ranked DB to this point, moved up the ranks a bit in this one. Mills should continue to have plenty of chances to rack up tackles in the Eagles' opportunistic defense.

Jalen Mills could have helped raise his draft stock on Monday by running a 4.47 40-yards dash, a vast improvement from his 4.61 time he ran during the NFL Scouting Combine. The product of LSU could be a tremendous value if he drops out of the second round of April's NFL Draft, though that scenario isn't likely. The Saints have the 74th pick in the second round, and it is doubtful that Mills will fall past New Orleans if he is still on the board.

Jalen Mills made Chad Reuter's safest picks among CB's list on NFL.com. Mills is ranked second behind Florida stand-out Vernon Hargreaves III. Reuter says that Mills could make a positional change during his career in the NFL and become a "long-time starter at safety."

Jalen Mills is slated to be selected somewhere in the mid-second to third round in April's NFL Draft. Possible landing spots include the Cowboys, Saints, Ravens and Giants. Mills is coming from a distinguished talent pool of defensive backs from LSU and could potentially become another Tyrann Mathieu.