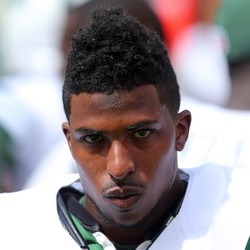 Patriots acquired WR/KR Jalen Saunders from the Saints in exchange for a conditional draft pick.

This is a depth move for the Patriots with them getting hit hard at wide receiver with injuries. Jalen Saunders probably won't have much of a role on offense but may be used as a return man. He does not have any fantasy relevance at this time.

New York Jets rookie wide receiver Jalen Saunders returned to practice on Monday, just ten days after suffering a seizure whilst driving his own car. He's expected to play in the final preseason game on Thursday night against the Philadelphia Eagles.

Saunders, should he remain healthy, will assume punt returning duties and will be a reserve wide receiver in his rookie year - meaning he won't have enough value in 2014 to make fantasy teams.

Jets fourth-round pick Jalen Saunders was involved in a one-car accident on his way to the team's training facility on Friday morning. He was taken to the hospital and is being monitored as a precaution, and the Jets have said that the wide receiver won't be travelling to Cincinnati for their second preseason game against the Bengals on Saturday.

Health-wise, Saunders will more than likely be okay following the accident, so it shouldn't have much of a bearing on his season, other than him missing out on a preseason game which is a chance to get some playing time and experience. His fantasy value as a wide receiver is low, as his primary role on the team should he make the roster is expected to be as a punt returner.

ESPN's New York Jets reporter Rich Cimini expects fourth-round pick Jalen Saunders to make the final roster, but primarily as a punt returner. He wrote: "Saunders will make the team as a punt returner, but the way it looks now, he'll be no better than the fifth or sixth receiver."

If Saunders' main role will be on special teams as a punt returner and nothing more, then he really doesn't have any fantasy value. He is probably one to avoid in his rookie year. Jalen Saunders will have to find his feet as a wide receiver if he is to have any fantasy value down the line.