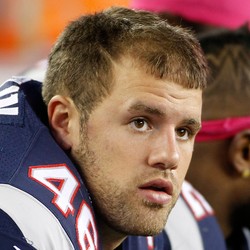 James Develin was placed on the injured reserve by the Patriots Monday.

Develin sat out Sunday's win over the Jets due to an undisclosed neck injury suffered Week 2 versus Miami. He plays a crucial role in the team's running game. The Patriots will look to add another fullback to the roster to replace Develin.

James Develin rushed once for a one-yard touchdown in the Patriots' preseason win over the Panthers.

Develin will catch a few passes but otherwise is nothing more than a touchdown vulture. Stay away.

James Develin rushed once for a two-yard touchdown in the Patriots' Week 14 loss to the Dolphins.

Once again, Develin is a blocking fullback and should not be used in fantasy football. Look elsewhere.

James Develin rushed four times for five yards and two touchdowns in the Patriots' Week 13 win over the Vikings. He also caught his only target for a nine-yard gain.

Develin is a blocking specialist who occasionally gets a short-yardage carry. He just happened to get two of them today, but should not be used in fantasy lineups under any circumstances.

Develin will return as the Patriots starting FB after missing all of 2015 with an injury. Develin is valuable for his blocking and versatility which does not translate to fantasy and will not be relevant this upcoming season in fantasy leagues.