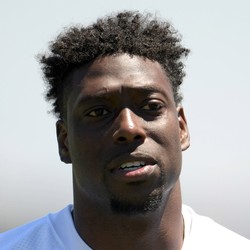 Despite a sluggish start to the year, Cook had at least 74 yards receiving or a touchdown in nine of his last 10 games leading up to the playoffs. He was one of the hottest fantasy tight ends down the stretch. Cook will open 2020 as a middling TE1 across most fantasy formats.

Saints TE Jared Cook caught both of his targets for 44 yards and a touchdown in Sunday's Week 17 win over the Panthers.

Despite a terrible start, Cook managed to find the end zone in seven of his last 10 games. He also had at least 74 yards receiving or a touchdown in nine of his past 10 games. Cook will open the playoffs as the Saints pseudo WR2 and should once again be a force in 2020 fantasy.

Saints TE Jared Cook caught 3-of-4 targets for 84 yards and two touchdowns in Sunday's Week 16 win over the Titans.

In a terrific matchup, Cook did not disappoint with his two touchdowns to go along with his 84 yards on only three catches. Cook has now scored eight times in his past nine games and will look to add to his totals in Week 17 at the Panthers.

Saints TE Jared Cook caught all four of his targets for 54 yards in Monday night's Week 15 win over the Colts.

While Jared Cook had a solid day in PPR, he did not score, which hindered his ceiling. Cook, who has been one of the hottest tight ends with a touchdown in five of his past eight games played while recording at least 54 yards receiving or a touchdown in each of those aforementioned outings, will look to get back into the end zone in a plus Week 16 matchup at the Titans.

The Saints expect Jared Cook to play against the Colts on Monday night. Cook, who is recovering from a concussion, was able to practice in full on Friday.

This is great news for the Saints and Cooks' fantasy owners. Cook only had two catches before exiting with his injury against the 49ers, but both went for scores. He is in consideration as a TE1 this week, as he's currently the TE12 based on our expert consensus rankings.

Deposit $10 at a DFS partner site you have NOT played at and get a FREE 6 Month HOF Subscription!
Claim Offer
Who Should I Start?
Most Accurate Experts
for Jared Cook
Consensus Rankings
View All Rankings