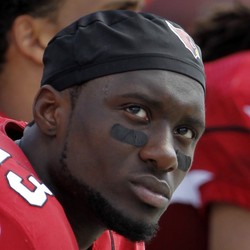 Jaron Brown (knee sprain) has been ruled out for Sunday's Wild Card game against the Eagles.

There is little fantasy impact to Brown's absence. Expect Tyler Lockett and D.K. Metcalf to dominate targets in an advantageous matchup this afternoon.

The fact that Brown saw zero targets in such a high scoring affair tells us all we need to know about his fantasy prospects once Josh Gordon is active on game day. Brown saw just 23 percent of the snaps in Week 9, well behind David Moore's 55 percent. Brown may see only a handful of snaps per game once Gordon is up to speed with the offense.

Seattle Seahawks wide receiver Jaron Brown was held off of the stat sheet despite an excellent matchup against the Atlanta Falcons.

With just 28 percent of the team’s snaps in Week 8, Jaron Brown appears to have fallen to fourth on the Seattle Seahawks depth chart. He saw zero targets in a great matchup while David Moore saw four come his way. Brown remains a hold in ocean deep leagues, but has showed that he has a waiver wire floor. Fantasy owners should be on the lookout for other options.

Jaron Brown caught three passes for 60 yards in the Seahawk's Week 7 loss to the Ravens.

Brown caught two touchdowns last week but remains a role player in the offense. Consider him a WR4/5 for a Week 8 tilt with the Falcons.

Jaron Brown caught three passes for 29 yards and two touchdowns in the Seahawks' 32-28 Week 6 win over the Cleveland Browns.

The two scores were Brown's first two of the season. He managed just five targets, however, and is a distant receiving option behind Tyler Lockett and D.K. Metcalf. Seattle faces Baltimore in Week 7.

Brendan Tuma - Too Much Tuma34 weeks ago

Deposit $10 at a DFS partner site you have NOT played at and get a FREE 6 Month HOF Subscription!
Claim Offer
Most Accurate Experts
for Jaron Brown
Consensus Rankings
View All Rankings
Do Not Sell
Are you looking to contact Customer Support about a subscription or account related question?
Yes
No, I'm a California resident looking for the California Consumer Privacy Act form