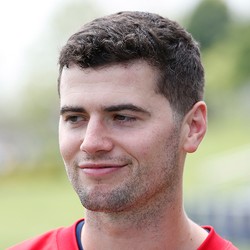 Jeff Howe of The Athletic reports the Patriots have implied that their signing of Cam Newton has "nothing to do" with Jarrett Stidham's performance.

Stidham was viewed as the team's starting quarterback entering the summer after New England chose not to pursue Andy Dalton, Jameis Winston, or Newton (initially) following Tom Brady's departure. Mike Reiss of ESPN mentioned Sunday night that he didn't view Newton as the bonafide Week 1 starter. It is clear that the Patriots like what they have in Stidham, but at some point Newton became affordable enough to lock down and bolster the team's QB depth chart. Assuming he's healthy it would be a shock if the former MVP didn't start in Week 1 against Miami. Stidham is no longer in play as a late-round option in best ball leagues.

Brendan Tuma - Too Much Tuma2 weeks ago
Jarrett Stidham: there will be some ‘growing pains’ but he's ‘got skills’

Former long-time Patriots assistant coach Dante Scarnecchia was on SiriusXM Monday and had this to say about Patriots QB Jarrett Stidham: “there’s going to be some growing pains — there’s no doubt about it. But the guys does have skills. He’s got a great mind.”

The full quote from Scarnecchia was as such — “I will say this for Jarrett, too: he’s a bright kid, and he’s a guy that, when he doesn’t know, he’ll take off [downfield]. He showed that in the preseason last year that he’s got some skills…So there’s going to be some growing pains — there’s no doubt about it. But the guys does have skills. He’s got a great mind. He cares. He shows up early, goes home late. And I wish him nothing but the best…” Scarnecchia was with the Patriots for all of Tom Brady’s years with the team, so he probably knows a little about what it takes to be a great quarterback in the NFL. Until further notice, it’s Stidham’s job to lose in New England, and its likely he’ll be the starter Week 1 with veteran signal caller Brian Hoyer working as his backup.

Adam Koffler3 weeks ago
Jarrett Stidham, Julian Edelman working out together this off-season

Patriots quarterback Jarrett Stidham has been working out regularly with Julian Edelman this off-season.

Stidham is expected to "compete" with Bryan Hoyer for the Patriots' quarterback job. However, it is widely assumed the 2019 fourth-round pick out of Auburn will be under center for New England's Week 1 contest against Miami. Building a rapport with a trustworthy slot receiver like Edelman is certainly encouraging news for proponents of Stidham.

Mike Reiss of ESPN confirms Jarrett Stidham is the "leading candidate" to be the Patriots' starting quarterback this season.

The Patriots' actions have been showing us this all off-season. The team did not make a serious attempt to re-sign Tom Brady. Meanwhile, they have shown zero interest in Cam Newton, Jameis Winston, or Andy Dalton. New England also didn't draft a quarterback. Assuming Stidham starts in Week 1 he should be considered a mid-range QB2 for fantasy purposes.

Brendan Tuma - Too Much Tuma11 weeks ago
Jarrett Stidham: Patriots not drafting a QB 'wasn't by design'

Patriots coach Bill Belichick says the team not drafting a quarterback this weekend "wasn't by design".

"If we feel like we find the right situation, we'll certainly draft them," Belichick said. "We've drafted them in multiple years, multiple points in the draft. Didn't work out the last three days. That wasn't by design." New England could've taken Jordan Love with the 23rd overall pick but instead traded down. Additionally, they chose not to roll the dice on Jacob Eason or any other quarterback in this draft class, instead electing to load up on athletic defensive players and tight ends. This puts Stidham in the driver's seat to replace Tom Brady entering the 2020 season. The 2019 fourth-round pick out of Auburn had a nice preseason last year but is obviously an unproven commodity in games that count.

Brendan Tuma - Too Much Tuma12 weeks ago
Who Should I Draft?
Most Accurate Experts
for Quarterbacks
Do Not Sell
Are you looking to contact Customer Support about a subscription or account related question?
Yes
No, I'm a California resident looking for the California Consumer Privacy Act form