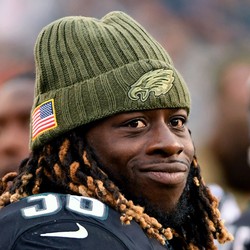 The Eagles have waived running back Jay Ajayi.

AJayi lost playing time in recent weeks to Boston Scott, and this move clears the way for Jordan Howard's return. Ajayi wasn't effective during his brief stint with the Eagles this season, carrying the ball 10 times for 30 yards across three games.

Eagles running back Jay Ajayi rushed two times for five yards and did not catch his only target in Monday night's win over the New York Giants.

Miles Sanders shouldered the load for much of the game on Monday night, but it is worth noting that when Sanders had to head to the locker room, it was Boston Scott and not Ajayi who saw most of the snaps. He seems to be stuck in a deep reserve role in Philadelphia as he continues to work his way back from a torn ACL.

Eagles running back Jay Ajayi had a minimal role in Sunday's loss to the Miami Dolphins, rushing just two times for nine yards.

Rookie running back Miles Sanders saw 17 of the team's 19 carries on Sunday as Ajayi continues to play a backup role. Unless things change in the coming weeks, Ajayi does not have much fantasy value right now.

Ajayi is still being rotated in for the Eagles as he continues to work his way into football shape, and it doesn't look like he is headed for the lion's share of the touches even with Jordan Howard out with a shoulder injury.

Recently-signed running back Jay Ajayi did not play in the team's loss to the New England Patriots on Sunday despite being active.

With Darren Sproles out for the remainder of the season and Jordan Howard missing at least this week, Ajayi signed with the Eagles on Friday. While Sunday is a short turnaround for a player who just signed on Friday, the expectation was that Ajayi was going to suit up and play at least a handful of plays. The Eagles opted instead to utilize Miles Sanders and Boston Scott in the running game.

Deposit $10 at a DFS partner site you have NOT played at and get a FREE 6 Month HOF Subscription!
Claim Offer
Most Accurate Experts
for Jay Ajayi
Consensus Rankings
View All Rankings
Do Not Sell
Are you looking to contact Customer Support about a subscription or account related question?
Yes
No, I'm a California resident looking for the California Consumer Privacy Act form