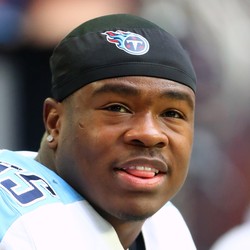 Jayon Brown recorded five solo tackles and one pass break up in a 35-24 loss to the Chiefs on Sunday in the AFC Championship game.

Much like the rest of the Titans' defense, Brown had no response to the potent Chiefs' offense. Despite falling short of a championship, Brown still had a successful campaign and will look to lead Tennessee back to the playoffs next year.

Jayon Brown logged seven solo tackles, three assisted tackles, one pass defended, and one interception, though the Titans fell to the Texans, 24-17.

Brown has been pretty good over the last four weeks, with solid numbers in the tackle department. However, fantasy owners should look elsewhere during the championship weeks. He and the Titans draw a difficult matchup in the Saints next Sunday.

Jayon Brown registered two solo tackles, five assisted tackles, one TFL, and one fumble recovery returned for a touchdown in a 42-21 thumping of Oakland.

Brown was in the right place at the right time when teammate Tye Smith punched the ball out of Darren Waller's arms. It also helped blow the game open, as it was still a two-score game when the Raiders were driving. Brown is a decent option next weekend against the Texans.

Jayon Brown managed 11 solo tackles and four assisted tackles in a convincing 42-20 win over the Jaguars.

Brown was in charge of corralling human freight-train Leonard Fournette and did a relatively good job, as he came up with nine stops on the Jags RB. Brown's career-high day was made possible by Jacksonville's affinity to run the ball, and he'll have a chance to rack up even more tackles against a Colts team next week that is even more conservative on offense.

Jayon Brown out snapped nominal starter Will Compton 44 to 19. Brown recorded 4 tackles in the Week 1 loss to the Dolphins.

It was encouraging to see Jayon Brown receive so much playing time, even if the production was not quite there. This situation will continue to get messier as rookie Rashaan Evans works his way back into the mix as he recovers from injury.