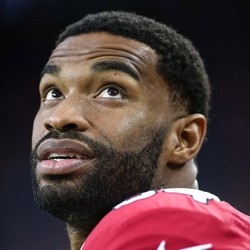 The Cardinals will release TE Jermaine Gresham when the new league year begins this week.

Gresham has flirted with fantasy relevance over the years at the wasteland that is the TE position. There are a few interesting free agent tight ends this offseason, and Gresham could become an interesting name depending on his landing spot. For now, he's just a name to monitor.

Blaine Blontz1 year ago
Jermaine Gresham with one catch in loss

Jermaine Gresham caught his lone target for 26 yards in Sunday's loss to the Vikings.

Gresham now has only four targets on the season, as Rickey Seals-Jones continues to be the priority in the passing game at the tight end position. As such, Gresham isn't fantasy relevant.

Although his playing status was up in the air, the Cardinals ultimately ruled out Gresham with an Achilles injury. Expect a heavy dose of Ricky Seales-Jones with Gresham out, in a favorable matchup versus the Redskins. Seals-Jones is an upside DFS play in the four o'clock games.

Jermaine Gresham is questionable to play Week 1 with an Achilles injury.

Gresham was activated from the PUP list prior to the start of the season, but it doesn't seem to guarantee that he'll suit up for Week 1. He was limited in practice this week. It doesn't seem he'll play a major role even if he's active with Ricky Seals-Jones expected to be the team's primary TE.

Cardinals tight end Jermaine Gresham caught three passes for 24 yards against the Seahawks, before he tore his ACL.

Gresham was targeted three times, all of which he reeled in. He had more than 24 yards in just four games in 2017, while his 9.9 yards per reception was the second lowest mark since Gresham’s rookie year. He is likely to miss the whole offseason.

Neil Dutton2 years ago
Most Accurate Experts
for Jermaine Gresham
Do Not Sell
Are you looking to contact Customer Support about a subscription or account related question?
Yes
No, I'm a California resident looking for the California Consumer Privacy Act form