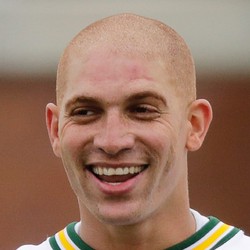 Schefter adds that the contract includes $9 million guaranteed. The veteran tight end never quite panned out in his two years with the Packers, but he’s at least another pass catching option for Chicago’s offense. The team is widely expected to move on from Mitch Trubisky this off-season.

Graham will then become a free agent. This move was expected as the 33-year-old was set to make $11.66 million if he stuck around in Green Bay. Graham played in all 16 games last year, catching just 38 passes for 447 yards and three scores. His days as a difference maker appear to be over.

Jimmy Graham is not expected to return to Green Bay, as he will hit the free-agent market, according to NFL.com.

The beneficiary here should be Jace Sternberger, who was selected by the Packers in the third round of the 2019 NFL Draft. He's an interesting player to own in dynasty leagues to see what comes of his 2020 role, and he could land on the TE1 periphery with TE2 value depending on what the Packers do at the position this offseason. Graham could remain fantasy-relevant in 2020, but it will be largely dependent of where he lands and his expected role with his new team.

When asked about Graham's future, general manager Brian Gutekunst stated it's "understanding" he wants to play next season. What he failed to mention was where exactly.

Graham still has another year on his current contract and is scheduled to make $11.67 million in 2020. Should the Packers decide to release him, they would be saving $8 million of cap space. He had 38 receptions for 447 yards and three touchdowns in 2019 with Green Bay. The soon-to-be 34-year old tight end has certainly seen better days and has lost a significant step from where he once was back in New Orleans.

Jimmy Graham caught four of five targets for 59 yards in the Packers’ 37-20 loss to the 49ers on Sunday.

Graham finished second only to Davante Adams (138) for team lead in receiving Sunday, and he narrowly missed a touchdown that was overturned on review. Graham had a down year by all accounts, though he has one more season left on his current deal with Green Bay and will try to bounce back in 2020.

Deposit $10 at a DFS partner site you have NOT played at and get a FREE 6 Month HOF Subscription!
Claim Offer
Who Should I Draft?
Most Accurate Experts
for Jimmy Graham
Consensus Rankings
View All Rankings
Do Not Sell
Are you looking to contact Customer Support about a subscription or account related question?
Yes
No, I'm a California resident looking for the California Consumer Privacy Act form