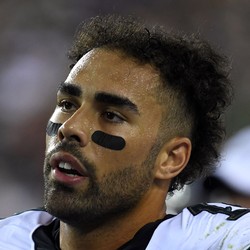 Roseman admitted that "JJAW" was playing through lower body injuries last season but also indicated the pressure for him to perform in 2020. The rookie wideout failed to take advantage of increased opportunity when DeSean Jackson and Alshon Jeffery were hurt last season. JJAW could be an interesting buy-low in dynasty leagues but is off the re-draft radar for now.

JJAW has been a massive disappointment since being handed a golden opportunity on an injury ravaged receiver corps. He failed to record a reception in Week 15, and saw just two targets. Arcega-Whiteside has always been more of a contested catch winner than a receiver who wins via separation, but his 0.87 average yards of separation in Week 15 is sub replacement level. He should not be trusted in Week 16 regardless of the health of Nelson Agholor.

Arcega-Whiteside could wind up as the Eagles' top receiver this Sunday against the Redskins. However, the rookie will still be difficult to trust in fantasy. Zach Ertz, Dallas Goedert, and Miles Sanders will probably handle the majority of the passing game work.

Arcega-Whiteside made a nice over-the-shoulder catch on Monday, but he only saw three targets despite starting on the outside again this week. With Alshon Jeffery potentially missing some time after leaving the game with an injury Monday, Arcega-Whiteside could see additional targets moving forward.

Eagles wide receiver J.J. Arcega-Whiteside caught one of his two targets for 15 yards and a touchdown in Sunday's loss to the Miami Dolphins.

Arcega-Whiteside made a nice play in the first half for his first career touchdown, moving back to the ball in the end zone with quarterback Carson Wentz scrambling. However, that was his only production for the day. He is expected to continue to start on the outside for the Eagles for the rest of the season, but his struggles make him hard to trust in fantasy.