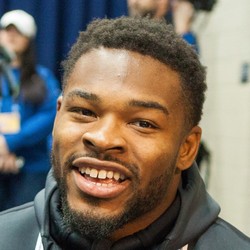 John Kelly has been activated from the Rams' practice squad.

With starter Todd Gurley not suiting up for Sunday's matchup against the 49ers, the Rams have activated Kelly from their practice squad to get some touches. While fellow backs Darrell Henderson and Malcolm Brown are expected to get the bulk of the carries Sunday, Kelly will add some necessary depth to the Rams' backfield.

Kelly operated behind C.J. Anderson in this one and wasn’t nearly as effective. The rookie running back will return to the bench when Todd Gurley returns for the divisional round in two weeks.

John Kelly rushed 10 times for 40 yards and caught one pass for 9 yards as the Rams beat the Cardinals in Week 16.

Kelly took a backseat to C.J. Anderson with Todd Gurley (knee) inactive. Anderson saw twice as many carries as Kelly and also found the end zone. This was just the second time Kelly has been active this season. He'll have a similar role in Week 17 versus the 49ers if Gurley is once again unable to go.

John Kelly was in active for the Rams' 33-13 Week 1 victory over the Raiders.

The rookie impressed throughout the preseason, but Los Angeles elected to only keep two RBs active in this one. Malcolm Brown was the backup to Todd Gurley. Kelly is nothing more than a high upside dynasty stash.

John Kelly rushed 15 times for 64 yards and two touchdowns as the Rams took on the Houston Texans in preseason Week 3.

He added two catches for zero yards. Kelly is a great running back prospect, but he’s obviously stuck behind Todd Gurley. The rookie could have mouth watering upside should anything happen to Gurley, but as of now he’s nothing more than a handcuff.