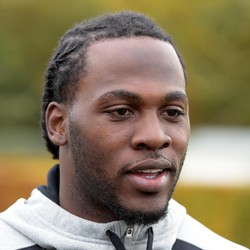 Joqiue Bell was not a factor in Chicago's loss to Jacksonville since he did not even take the field.

Bell sits behind the impressive Jordan Howard and the more-involved Ka'Deem Carey so he will not be fantasy relevant unless something happens in the depth chart. His role will be minimized even more with the return of Langford. Bell is not worth hanging onto except in deep, deep leagues.

Signed this past week with Jeremy Langford and Ka'Deem Carey banged up, veteran RB Joique Bell made his Bears' debut against his former team, the Detroit Lions on Sunday.

Bell had three carries for six yards in the 17-14 home win. The highlight of his day wasn't pretty as he was stuffed on a 4th-and-1 run up the middle for a loss of yards. Bell will likely be in for the change of pace role next week with Langford and Carey still recovering.

Former Detroit Lions RB Joique Bell apparently has multiple teams interested in his services and spoke to the Detroit Free Press about his pending NFL status. "Last time I checked, I had three offers on the table," Bell said. "I know two are still there. One might not be there anymore. We'll see what happens."

Joique Bell played five seasons in the NFL with the last four of which making a home in Detroit. Bell was released early in the offseason as a cap casualty and has been off the radar for months. There is no apparent timetable for when the veteran will land with a team, but history shows that he will likely wait it out and land with an organization that gets bit by the injury bug at the running back position. In 2015, it appeared that Bell was being phased out of Detroit's offense as he had his worse statistical output since 2012. He finished the year appearing in 13 games and accounted for 112 touches for 597 total yards and four touchdowns. Bell has minimal fantasy value even if and when he signs unless he is named a No. 1 or No. 2 running back at some point during the season.

The Detroit Lions have cut running back Joique Bell after spending four seasons with the team.

After producing career lows in nearly all rushing categories, the running back will be looking for a new team in 2016. Ameer Abdullah should be the clear starter heading into the new season.

Bell was very quiet Sunday, with three rushes for nine yards, and two receptions for 49 yards as the Lions beat the Bears to conclude the season.

Coming off of a career-best 2014 season, this will be one for Bell to forget as it was filled with injuries and little impact. He played 13 games and averaged less than seven touches per game. With Riddick having a strong year and Abdullah standing to see more touches next season, it is unclear what role Bell will have next season in the final year of his contract. If he is still owned in keeper or dynasty leagues, he shouldn't be too hard to let go of.