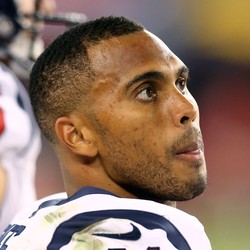 Jonathan Grimes did not make the final 53 man roster for the Jacksonville Jaguars.

Grimes was always a long short to make the Jaguars in 2017. He was behind Leonard Fournette and Chris Ivory as the first and second down RBs. Grimes didn't do enough in the preseason to solidify his roster spot.

Jonathan Grimes had the second-most receptions for Houston in their 34-16 loss against the Patriots on Saturday, grabbing all four of his targets for 43 yards. Grimes also had two carries for 11 yards. He finished the season and postseason with 283 total yards.

Grimes had a nice postseason for his value, as he also had four carries for 30 yards in the Texans' AFC Wild Card round victory over the Raiders. He also had four receptions in Week 17, showing that he was getting opportunities in the passing game as well. Grimes is a free agent this offseason and his 4.9 yards per carry over the last two seasons make him an intriguing option as a backup RB.

Jonathan Grimes rushed for 26 yards on four totes with a touchdown, and hauled in 4-of-5 targets for 28 yards and an additional score as the Texans clinched an AFC South title with their victory over the Jaguars in Week 17.

Grimes two scores were only his second and third of his career. He'll continue to get his five-to-eight touches or so in a change of pace role behind starter Alfred Blue. He's not fantasy relevant in DFS or any Playoff Challenge format.

Jonathan Grimes gained 25 yards on six rushes in the Texans Week 16 victory over the Titans.

Grimes didn't receive any looks in the passing game this week, but he was used in the wildcat formation on multiple plays along with newly-signed backup QB B.J. Daniels. The formation didn't amount to much, but it is something to monitor when evaluating this team without Brian Hoyer at the helm. Grimes continues to be used sparingly and was never really a fantasy asset at any point this season.

Jonathan Grimes was non-existent in Week 15, gaining only one yard on his lone carry.

Typically the passing-down back, Grimes took a back seat this week as Akeem Hunt ended up earning a bigger role, and Alfred Blue reclaimed the majority of the carries in this one. Grimes had received at least seven touches in every game since Week 8 prior to today. He's not fantasy viable.